THE 10 MOST POPULAR GRAPE VARIETIES OF THE WORLD

SOME VARIETIES ARE MORE FAMOUS THAN OTHERS, OTHERS MAY NOT BE SO WELL KNOWN BUT THEY ARE RESPONSIBLE FOR WELL-KNOWN CREATIONS SUCH AS BALSAMIC VINEGAR! 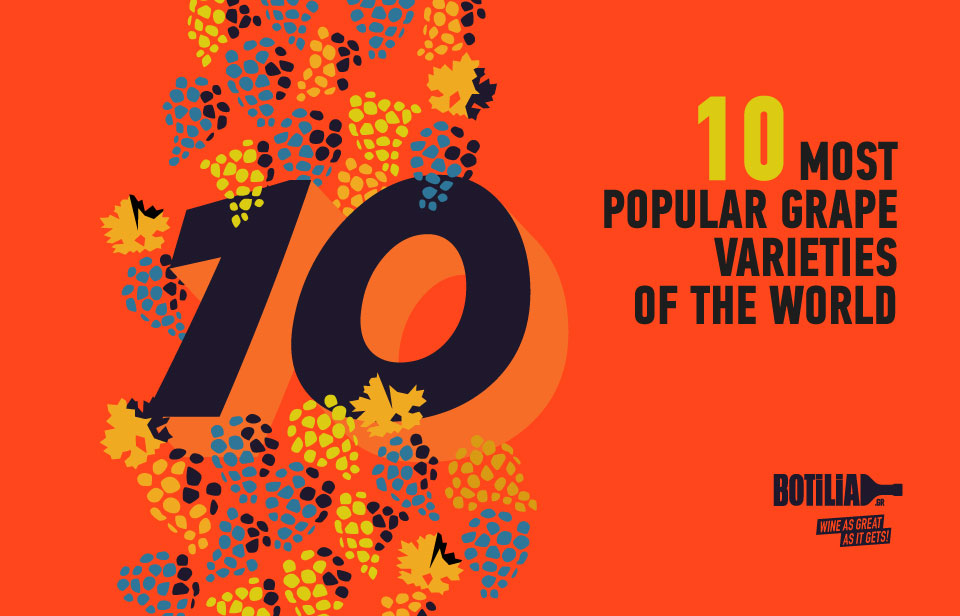 Some of them are well known since they have numerous fans and millions of plantings around the world! Others, while not so well known, exist in our daily routine in other forms, such as balsamic vinegar. Read on below and get ready to be surprised!

The beloved red variety originating from Bordeaux is at the forefront with most plantings worldwide. The reason is no other than its adaptability to the various terroirs and that way it is cultivated almost everywhere, even in China. On the plus side, it is a versatile red variety that gives great red and rosé wines.

The rival variety of Cabernet Sauvignon on the right bank of Bordeaux has fanatics all over the world thanks to its plum and chocolate aromas. It is second in plantings and it is cultivated almost everywhere because it matures much easier than Cabernet and gives more round wines.

It is the widest planted variety in Spain. The reason; Its resistance to drought and poor soils. At the same time, it is a very productive variety mainly used in brandy production. It is easily oxidized but in recent years, with very careful vinification, it gives light white wines.

It is the most famous, red variety of Spain! It gives red, age - worthy wines in Rioja and Ribera del Duero. It is categorized according to its maturation (in barrel and bottle) and each category has a different style.

The beloved white variety of Burgundy and of the world in general, could not be missing from this list! In Burgundy it makes wines with barrel maturation and great aging potential. The rival of Burgundy is Chablis where it yields wines that are rarely aged in barrels and have a strong mineral character and high acidity. Except for France, it is cultivated almost everywhere!

The Northern Rhone variety, which carries a glittering career in Australia, ranks 6th with many plantings worldwide. It gives full bodied wines, with a spicy character that age well.

Garnacha for the Spanish or Grenache Rouge for the French. This variety is said to originate from Sardinia and from there it was transported to Spain. It gives soft red wines with red fruit character and crisp acidity.

It is the father of Cabernet Sauvignon and its name means wild white. Originating from France where it produces iconic white dry wines (Pouilly Fume, Sancerre) it has conquered the world.

Ugni blanc or Trebbiano is the white variety used to produce Cognac as well as Modena's famous balsamic vinegar.

The king of Burgundy makes epic, elegant red and sparkling white wines. Demanding in cultivation and climatic conditions, it prefers cold climates such as those in Burgundy, Oregon and New Zealand.