THE MOST IMPORTANT VARIETY OF SPAIN GETS IN THE MICROSCOPE OF BOTILIA.GR. LEARN WHAT YOU NEED TO KNOW ABOUT TEMPRANILLO IN 5 '! 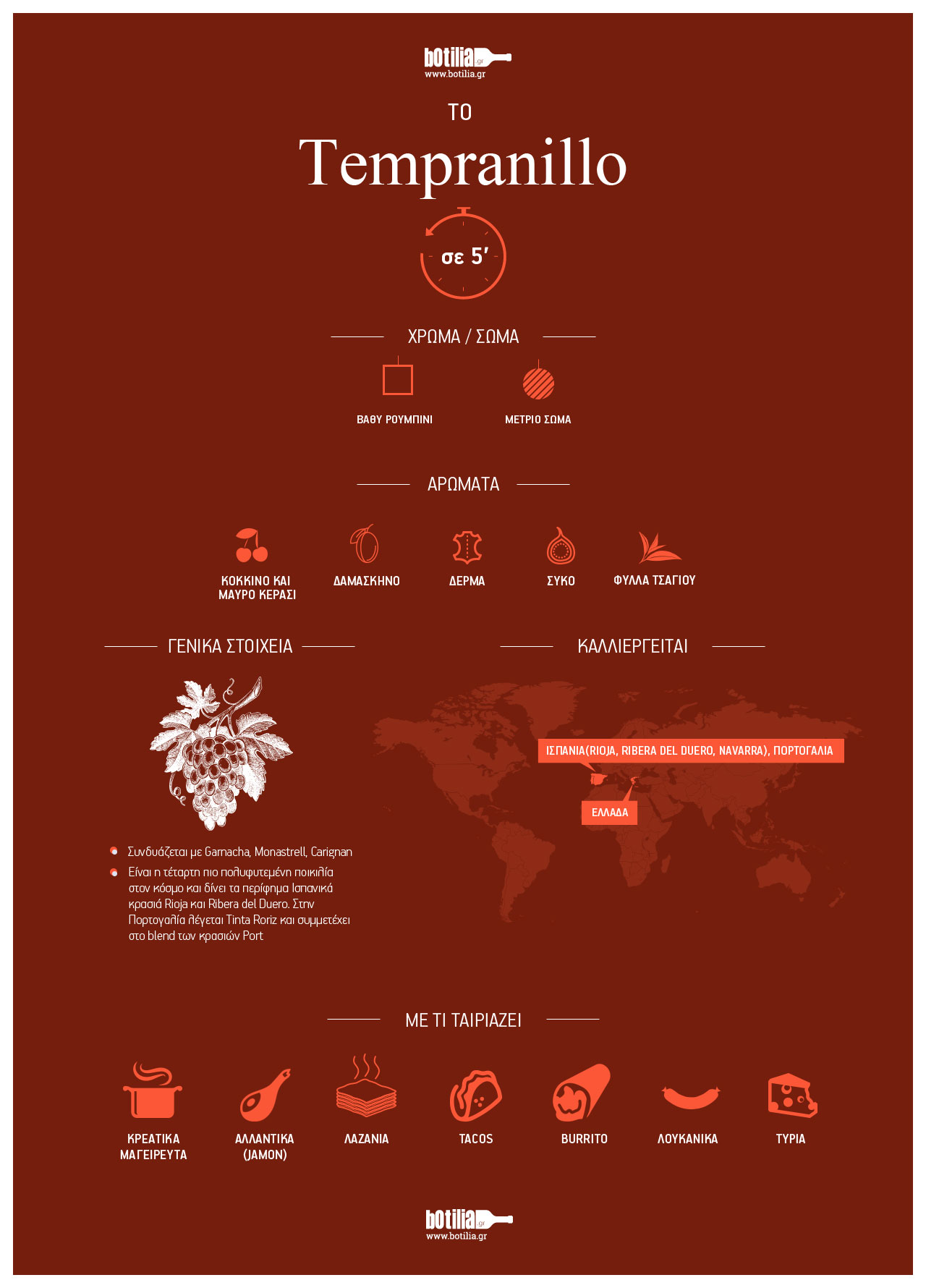 The origin of Tempranillo is Spain where it is found with many different names such as Tinto fino, Tinto del toro, Tinto de la Rioja, depending on the region. The name of the variety comes from the Spanish word temprano, which means "early", a reference to the fact that it ripens faster than any other Spanish variety. It is the dominant variety in the red Rioja, the most famous Spanish wine, which is the first region in Spain that was characterized as PDO and is located in the north of the country near the town of Logrono, on the River Ebro.

Red wines from Rioja are usually a blend of different varieties such as Tempranillo, Garnacha, Graciano and Mazuelo. Depending on aging time and barrel use, Rioja is divided into the following categories:

• Rioja Joven, which does not require any aging or maturation in oak barrel

• Rioja Crianza, which requires two years of aging, one of which takes place in oak barrel

• Rioja Reserva, which requires three years of aging, one of which is mandatory to take place in oak barrel

• Rioja Gran Reserva that requires at least two years aging in oak barrel and three in the bottle.

Southwest of Rioja is another area, equally famous for the Tempranillo wines, Ribera del Duero. The fact that the vineyards are planted at a fairly high altitude  (850 meters) and the cooling breeze by the Duero River, have led Ribera to produce some of the best wines in the world.
The resilience of the variety allows its cultivation in different types of climates and that is the reason why we find it in many vineyards around the world, such as in the United States of America, McLaren Vale, Australia, Argentina and Chile. In our country we find it in northern Greece and in Crete.

In Rioja it offers wines which, depending on aging and the use of oak barrel, vary from light to full bodied. From a Joven or a Crianza Rioja we expect a wine of moderate ruby ​​color, moderate acidity and mild tannins, while the aromas we find are those of red fruits such as cherry and strawberry with some leather notes.

From a Reserva and a Gran Reserva Rioja we expect a more rich wine with deep ruby ​​color (sometimes there are some garnet hues from aging) moderate acidity and moderate (+) tannins. The aromas we encounter here are more intense and complex. Plum, sour cherry, dried fig, vanilla coffee, but also clove, leather and tobacco. These wines have a great aging potential that easily reaches 10-15 years of aging.

Ribera wines are more acidic, with more refined tannins and aromas of black cherry, blackberry, mocha, truffle and sweet spices such as cinnamon and licorice. These wines have good aging potential too.

When we combine Tempranillo with food, it is advisable to avoid acidic flavors such as lemon, vinegar and tomato, because their acidity is usually greater than that of the wine. On the contrary, juicy beef burger with barbecue sauce, skirt steak with mushroom sauce, spicy lamb chops with vegetable ragout and savory cold cuts such as jamon and chorizo ​​are ideal combinations.