ONE OF THE WORLD'S MOST BELOVED VARIETIES, GETS UNDER THE MICROSCOPE OF BOTILIA.GR! LEARN WHAT YOU NEED TO KNOW ABOUT MERLOT IN 5'! 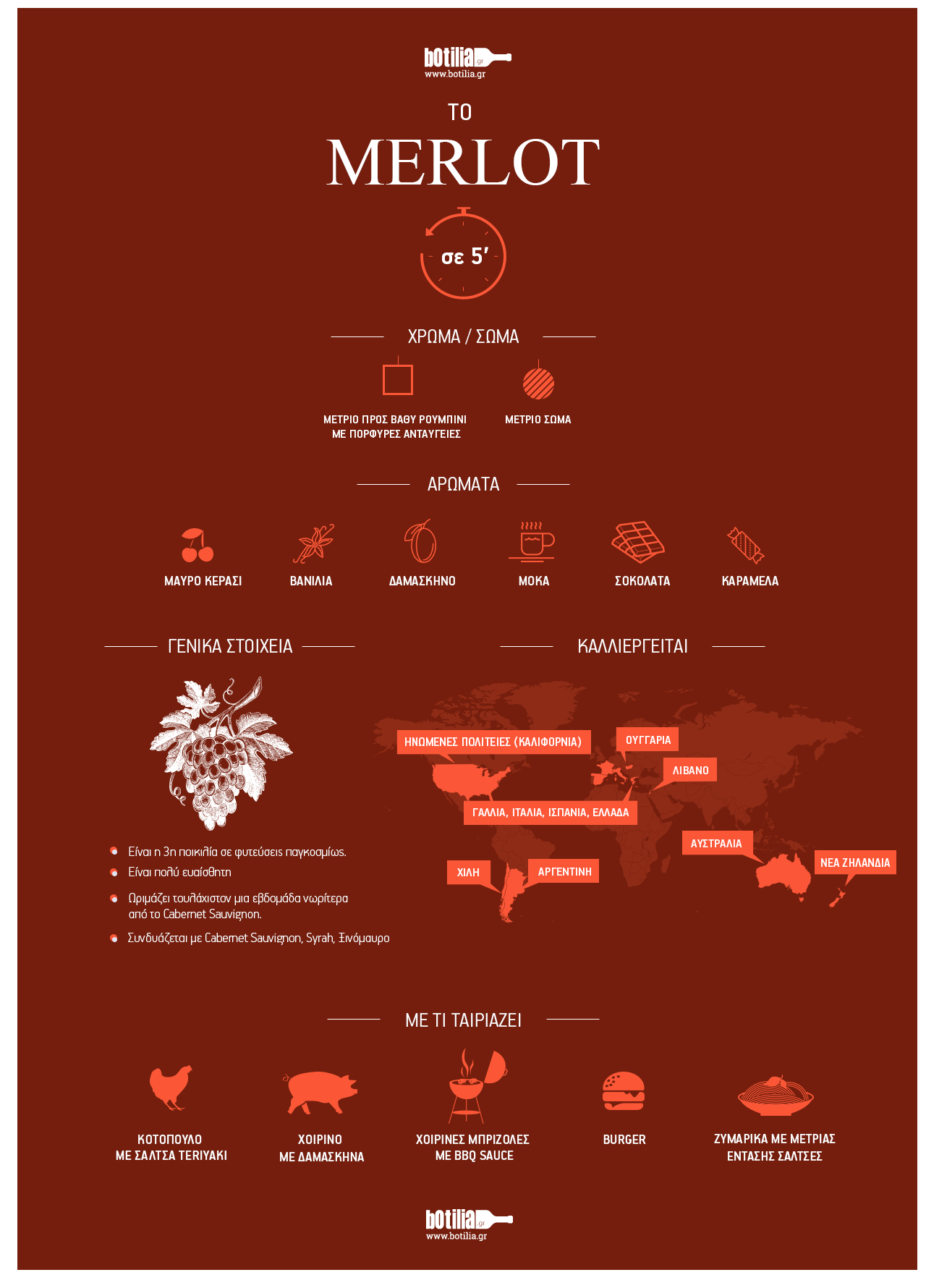 Since Merlot ripens at least a week earlier than Cabernet, it is a "security grape" where rain is frequent at harvest. Merlot gives its best character in rocky, dry soil, but is quite versatile and responds better than Cabernet in clay and even in wet, cool climates. Because it blossoms early, the main concern of growers is coulure sensitivity from frost, rain or heat in the spring. Merlot berries are relatively thin and susceptible to sepsis.

It mainly gives red wines and some rose. It is vinified on its own, but it also participates in many blends by providing fruit and velvety tannins. In blind tastes, the characteristic orange color on the rim of the glass is what distinguishes it from Cabernet Sauvignon.

Merlot is a paraphrase of merle, which in French means a little blackbird. It has other names that arise from the areas where it is planted and is famous as St. Emilion, Pomerol, Fronsac, Côtes de Bourg and Blaye. This wonderful French variety is result of the crossing of Cabernet Franc and the endangered variety, Magdeleine Noire des Charentes.

In France, it is the number one variety in plantings and gives excellent Bordeaux wines either on its own or in combination with Cabernet Sauvignon. In fact, the right bank of Bordeaux consists mainly of Merlot. It is worth mentioning that the well-known and expensive Petrus (1000 €) is Merlot!

Apart from France, however, Merlot is quite widespread in Italy too, where it is the fifth most planted variety. In Tuscany it takes part in the Chianti blend and the famous Supertuscans! Merlot traveled to America in 1850 but no one seemed to notice it until the 1990s where it became a hit. So by 2003,there were over 50,000 hectares of Merlot,  in California.

The variety makes medium - bodied wines, with balanced acidity and moderate, velvet tannins. The color varies from medium to deep ruby ​​with purple hues, when it is young. Maturation in oak barrels suits it, whether it is French or American, by giving it extra depth and complexity.

If I had to choose only 2 characteristic aromas for Merlot, then these would definitely be plum and chocolate. It has a strong character of black fruits such as cherry and berry, toffee notes, but also vegetal hints of olive or capsicum when it is plant in colder climates. By maturing in oak barrel it acquires notes of vanilla, sweet tobacco and mocha. By aging it develops an earthy character with notes of coffee, forest floor, mushroom and tar.

In its rose versions, it retains its Cherry-like character with more emphasis on its herbaceous substance and the notes of toffee.

Merlot is really a passe-par-tout for food. It can go well with many dishes of different styles and cuisines. It goes perfectly with light meats like pork and chicken with various sauces such as barbeque, teriyaki, hoisin. It loves juicy burgers with caramelized onions and brioche bread roll as it is round, with velvety tannins and balanced acidity but with plenty of fruit. You can pair it fit with a Peking duck or a roasted one but it will also be a perfect companion to a classic pork stew with prunes.

On the other hand it goes well with rich pasta dishes, for example with a tomato sauce with sausage and peppers or even with pastitsio. For the end I will leave the better and most simple pairing: pizza! Merlot is an "easygoing" and soft wine that everyone loves, just like pizza!