ONE OF THE MOST WIDESPREAD VARIETIES IN THE WORLD, CABERNET SAUVIGNON IS GETTING ANALYSED BY BOTILIA.GR! LEARN WHAT YOU NEED TO KNOW IN 5 '. 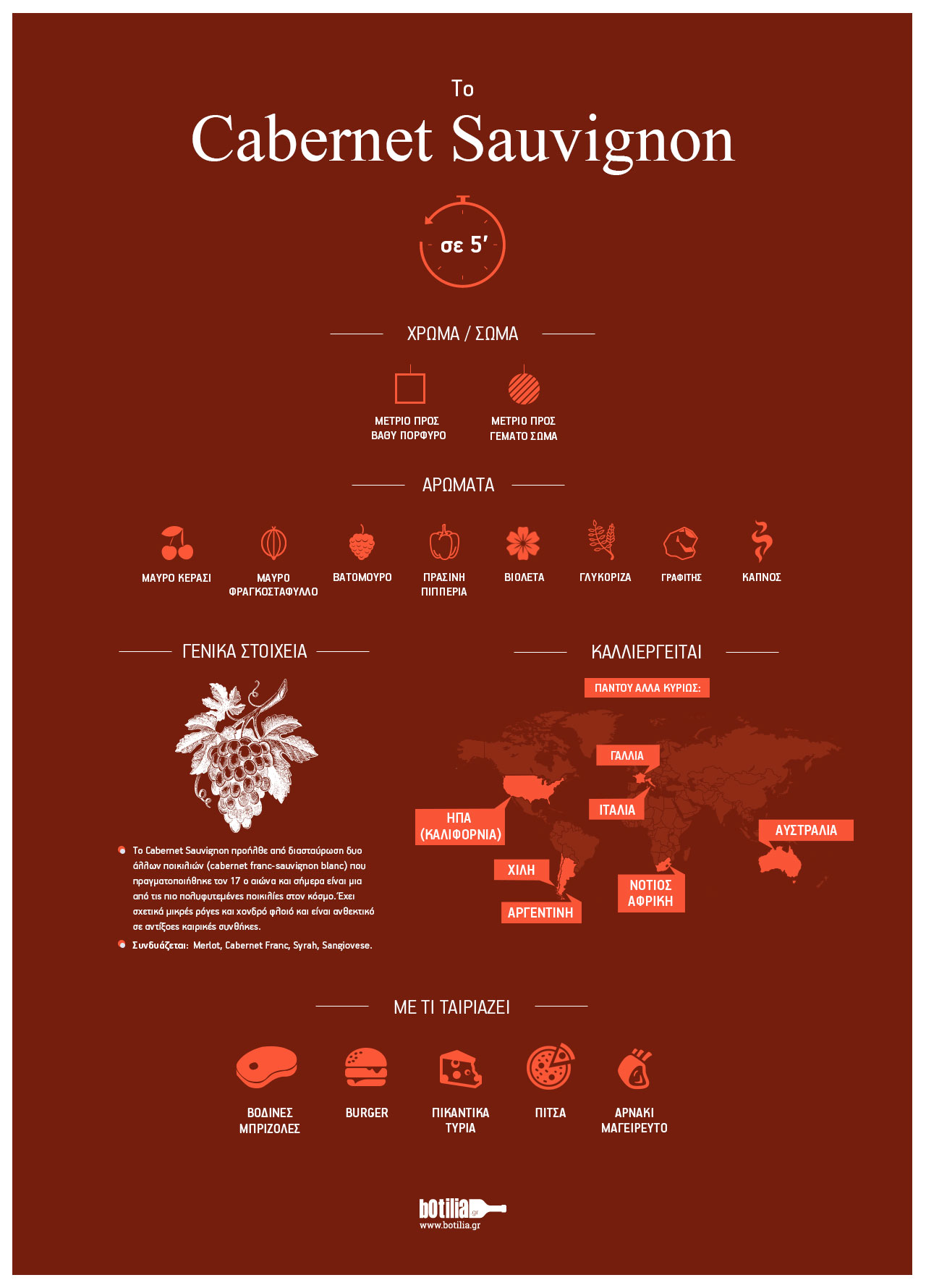 For many it is considered the king of red varieties. It is grown almost in every wine-growing region around the world and in various climates, from cold to hot. It matures relatively late (1-2 weeks later from Merlot and Cabernet Franc). Unlike its cousin Merlot who loves calcareous soils and clay, Cabernet triumphs in rocky soils of good drainage.

It resulted from the crossing of Cabernet Franc and Sauvignon Blanc, preserving the aromatic characteristics of both varieties. Its home is Bordeaux, France, but it has an international career by giving fine wines both inside and outside France. Cabernet Sauvignon is cultivated even in China, in the Gobi Desert.

Cabernets have a medium to deep purple color that tends towards to ruby ​​with aging, moderate (+) acidity, body and tannins. The pyrazines give Cabernet Sauvignon the characteristic aroma of green pepper! The colder the climate the less it matures, and so there are more pyrazines giving this characteristic aroma. In warmer climates where ripening is better, the wine has aromas of black pepper!

France's Cabernet is more stringent, with pepper, ink, tea, leather and blackcurrant notes, with tobacco and cedar nuances when they are aged in a new barrel. They have a very long aging potential, in fact it is preferable to enjoy them after they have aged and not as long as they are fresh. Cabernet of the New World has a juicy and ripe fruit (black cherry) with notes of milk chocolate, tobacco and eucalyptus. They are enjoyable in their youth but can also age (less than French of course).

The classic blend with Merlot gives softer wines, with moderate acidity, more fruit (plum) and intense chocolate character. This blend is responsible for the most emblematic wines of Bordeaux, with astronomical prices and limited quantities.

Cabernet is a really tasty wine that, because of its acidity and tannins, loves meat and sophisticated flavors such as dry aged rib eye, stewed beef, roast beef, Stroganoff and spare ribs with red wine. The juicy and fruity Caberbets can even accompany pizza or burger. If you want to experiment, an aged French Cabernet would be great with roe deer with red wine and spices or even a duck fillet with a red fruit sauce. Like all the wines, it also loves cheeses: spicy, buttery, white and semi hard, such as 5-year-old Naxos, Beaufort, brie, gouda, etc.