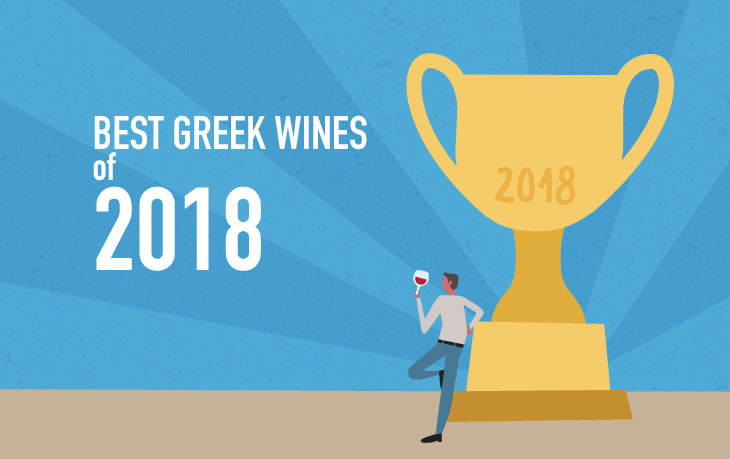 These are the best Greek wines as selected by 22.000+ members of botilia.gr among the hundreds of choices that appeared οn it. Criterion was your preferences and your rankings on botilia.gr.

Update: Take a look at the list of the Best Greek Wines of 2019

18. Nemios Oenos - Estate Gofas
Agiorgitiko from Koutsi of Nemea and a 6-month stay in French oak barrels create a red wine with a unique value-for-money ratio. Nemios Oenos is perfect for moments of everyday luxury.

17. Kotsifali - Merlot - Karavitakis Winery
Smart, modern label and an original Cretan blend at a surprising price! Soft, rich and with the animal nuances of Kotsifali shining, it is one of the most loved Greek red wines and definitely one of the Best Greek Wines of 2018!

16. Don Giovanni - Papargyriou Winery
Nebbiolo in the hands of Yannis Papargyriou gives a wine with finesse and character that is very hard to resist! Absolutely collectible since the bottles are strictly limited.

15. Deka White - Oenogenesis Winery
Three French varieties, three different types of barrel. Sauvignon Blanc (55%), Ugni Blanc (15%) and Semillion show their love at the unique terrair of Drama and in the hands of the maitre of the varieties give a wine of unparalleled character.

12. Natural Red - Anatolikos Vineyards
The blend of Mavroudi and Limnio that matures in amphora with almost no intervention is an impressive red wine, whose exuberant taste remains engraved in the mind and heart of those who taste it.

10. Tear of the Pine - Kechris Winery
The retsina, that changed everything and was glorified as no one ever was, could not be missing from the list of the best Greek wines. Assyrtiko that matutres in oak barrels and the precious tear of the pine are joined in a wine hymn in Retsina.

9. Malagouzia - Kitrvs Winery
The best Malagouzia with a difference! Each year is better, and the stelvin cap gives extra points of originality and style.

6. Le Roi des Montagnes Cuvee - Estate Papargyriou
The maitre of concentration, Yannis Papargyriou, strikes again. With his "King of the Mountains", he gives a shiver to the all the winelovers and is definitely one of the best Greek wines.

5. Moschopolis 18 -Moschopolis Winery
It is a relatively new addition, however, this wine from Mavrotragano and Syrah has managed to built its myth. Juicy, rich, buttery with well integrated barrel, was one of the reds that won over its audience within a single month.

4. Le Sang de la Pierre - Aivalis Winery
Surely the most impressive Agiorgitiko that has been released so far! Each year it is almost vanished and the reason is the huge fruit concentration, its very good velvety structure and its impressive complexity.

3. Old Roots - Tatsis Winery
Old Roots Xinomavro of Tatss Winery is the star of the region and perhaps one of the best Xinomavro. It's still young but it has all the characteristics of a big red wine that will continue to evolve for at least 15-20 years!

2. Fine Mavroudi - Anatolikos Vineyards
Fine Mavroudi no longer requires recommendations. It belongs rightly to the best Greek wines and every year it gains more and more ground. The variety that got Polyphemus drunk, in the hands of Nikolaidis brothers gives its best expression.

1. Deux Dieux - Aivalis Winery
The absolute combination of the two divine varieties, Agiorgitiko and Syrah by the magician Christos Aivalis, couldn't not be the best seller of the year. It is undoubtedly the Best Greek Wine of 2018 according to botilia.gr's 22.000+ members.