THE SECOND MOST POPULAR WHITE VARIETY IN THE WORLD, IN 5 MINUTES! 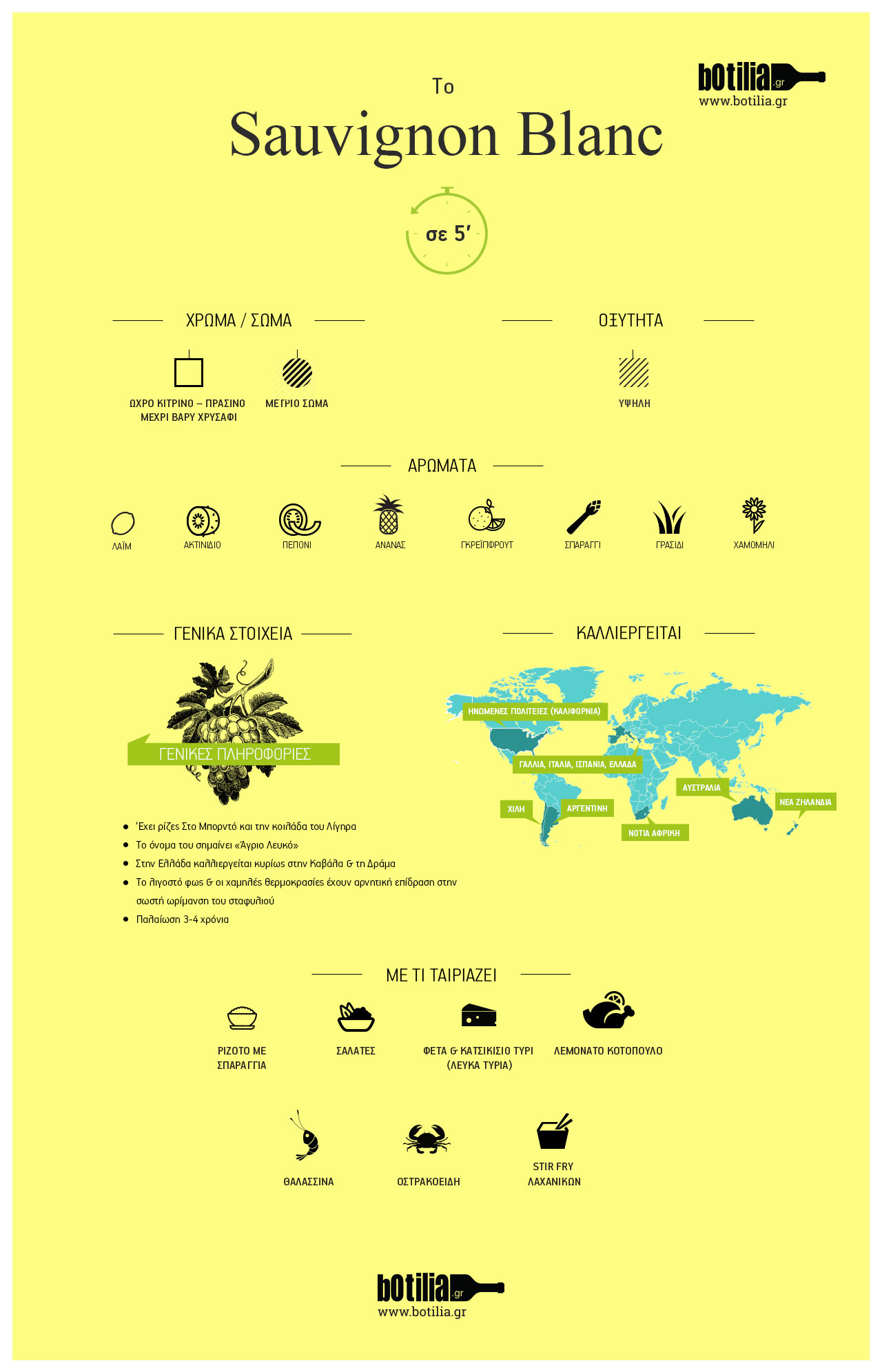 Sauvignon Blanc was found in the 18th century in the Loire Valley and Bordeaux. Now it has almost conquered the world. California (remember the Fume Blanc!), South Africa, Australia & New Zealand hold it in high esteem in and host it with fury. It has won the 8th place in the list of the most common grape varieties worldwide and the 2nd on the corresponding white list with Chardonnay being the first.

In addition to exceptionally dry wines, he also participates in a world-famous dessert wine: Sauternes! The variety is very sensitive to noble rot (botrytis) and has a completely different aromatic dimension, so when it is blended with Semillon it gives a wine of extraordinary complexity that cannot be compared to any else in the world.

It is now so famous that every year the world day of Sauvignon Blanc is celebrated on April 24th.

The primary aromas are fruity with predominantly citrus fruits such as lime, green apple, passion fruit and peach. Notes of melon, pineapple and chamomile are common, while the most characteristic feature is the intense herbal sensation of grass, asparagus or green pepper, which makes it distinct from other whites. And if you want to outsmart everyone, know that this herbaceous character is due to pyrazines, aromatic compounds that make up the covert paper of Sauvignon Blanc.

Its color varies from pale lemon with green shades to intense gold, it has medium body and consistently medium to high acidity.

Since it is cultivated widely, its organoleptic characteristics are clearly different, depending on the area of ​​cultivation and the winemaking technique chosen by the oenologist. For example, when the must is left with the skin, the result will be a rich wine with aging potential. In addition, vinification temperatures affect and differentiate its aromatic character.  Producers all over the world, even in France, avoid the aging in oak barrels as they prefer not to alter its herbaceous and fresh fruity character.

A Sauvignon Blanc from Pouilly Fume or Sancerre, has a more rigorous, mineral character and sharp acidity, so it is more suited to shellfish such as clams and oysters raw or steamed, always with a drizzle of lemon. On the other hand, he would match perfectly with a char-grilled fish with olive oil.

Sauvignon from slightly warmer climates such as Italy or Greece have a slightly more aromatic character where citrus and sometimes their blossom dominate. Here things are clearer: light lemony dishes with veggies, such as chicken with lemon sauce, frikase with cod, mushroom soup with greens, go great with the wine. On the other hand, the citrusy acidity helps to combine with fried fish or shrimp but also with white cheeses like feta or chevre.