ASSYRTIKO VS MALAGOUZIA - THE VARIETAL'S DUEL

DO YOU LOVE THE ACIDITY OF ASSYRTIKO OR THE FLORAL DIMENSION OF MALAGOUZIA? WHICH OF THE TWO AGES BETTER? WHICH ONE GOES BETTER WITH FOOD? READ AND LEARN EVERYTHING IN A SPECIAL ... BATTLE! 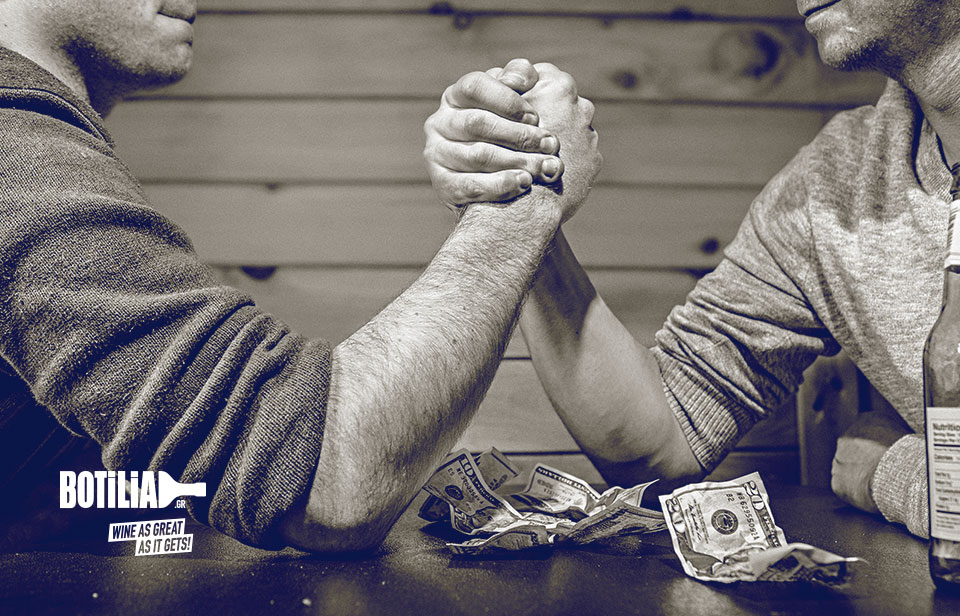 Assyrtiko is considered by many to be the king of white Greek grape varieties, while Malagouzia is the Cinderella of the Greek vineyard. Both varieties have a fanatical audience that drinks… wine in their name but at what elements each variety is superior? In a battle, who would win on points? We decided to organize the first "titanic battle" of the two white Greek grape varieties, so get popcorn and read below!

One of the main characteristics of Assyrtiko is its sharp acidity, whether it comes from its birthplace Santorini or from Northern Greece. On the other hand, Malagouzia has medium acidity and if we go to cooler climates, it “climbs” to medium (+). Do not rush to say that Assyrtiko won because high acidity is not always what is required. Specifically, Malagouzia based its career on its round acidity, so you might want to reconsider…

Assyrtiko of Santorini has full body and high concentration while as we move away from the island its body usually goes to medium (+). Malagouzia’s body varies from medium+ to medium -, depending on the viticultural practices and the climate. The impressive thing here is that even with a medium body, its oily texture in the mouth wins the impressions.

Assyrtiko can give many styles of wines. From rich, oak aged to mineral and sharp whites, from still to sparkling and from dry to sweet while it makes excellent orange wines! Malagouzia is famous for its fresh white wines but it has also given some special samples with oak aging or aging in amphora. It makes mostly still, dry white wines and a few orange and dessert wines.

On the nose, Assyrtiko is austere, with aromas of citrus mainly, some hints of unripe stone fruits or green fruits and notes of minerality. Malagouzia here steals the show! Tropical fruits, peaches, lemons, white flowers and herbs cause an aromatic explosion in the glass.

Assyrtiko is the king of aging and is now known. Assyrtiko from Santorini after a decade is mind-blowing with its complexity and intensity while at the same time Assyrtiko outside Santorini shows very good signs of aging potential and evolution over time. Malagouzia on the other hand, with a few exceptions, is a variety that is appreciated for the freshness it has in its youth and as it has been seen it is good to be consumed 1-2 years after its release.

Assyrtiko loves rich and intense fish such as grouper, salmon, eel, smoked, grilled or cooked in lemon sauces. At the same time, its pairing with oysters and seafood is almost classic. The most rich versions can accompany even roasted lamb, fricassee and pork roast with orange. Malagouzia is a lady, fine and perky and from fish she prefers sea bass or Dover sole sauteed, poached or steamed but also sushi! She loves squid and spicy, shrimp dishes of Asian origin but does not stop here. The lemonier versions go well with cheese pies, fresh soft white cheeses, vegetable stews, grilled chicken and pasta with pesto.

In this battle we have no winners or losers. At some points Assyrtiko is superior and at other points so is Malagouzia but the essence is that both varieties have their place, time and role and believe me they play this role extremely well in whatever scene they stand. Also, let’s not forget that wine is always a matter of taste and some prefer acidity while others don’t, some are crazy about flowers, some are allergic to them. I have one thing to say: I wish all the dilemmas of my life were like this, to choose Assyrtiko or Malagouzia…!