EN ΕΛ
POSTS Tuscany: Everything you need to know about her wines in 5 minutes
ALL | POSTS | RECIPES | BOTILIA SPOTS

TUSCANY: EVERYTHING YOU NEED TO KNOW ABOUT HER WINES IN 5 MINUTES

TUSCANY IS A PARADISE ON EARTH WITH AMAZING WINES, SUBLIME GASTRONOMY AND LACY VINEYARDS. TRAVEL MENTALLY TO CHIANTI AND LEARN EVERYTHING YOU NEED TO KNOW IN 5 MINUTES. 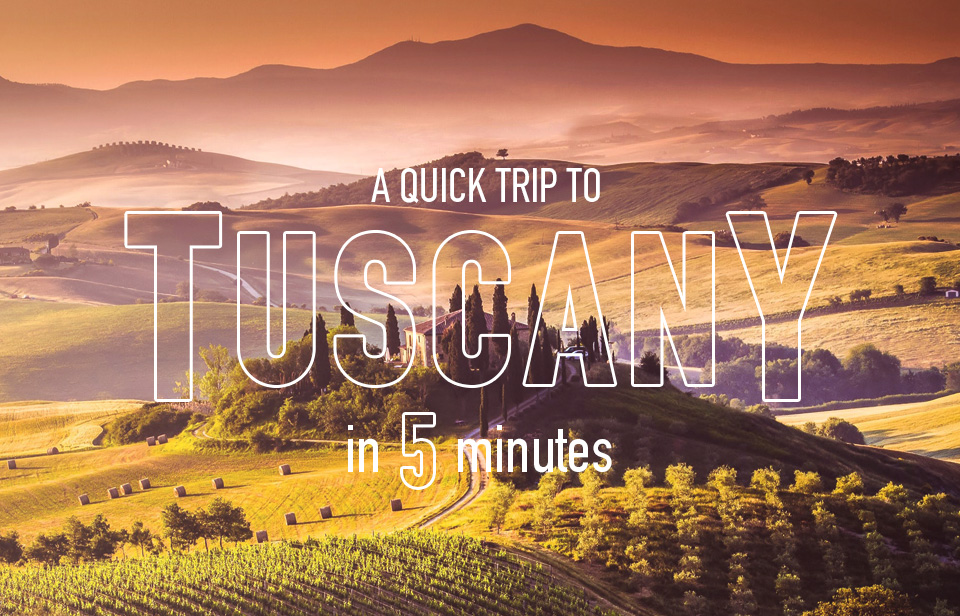 Whenever I think of Tuscany, I close my eyes and the endless vineyards spread out in front of me, and I gaze at them from the balcony of Antico Caffe Poliziano that Pirandello used to get inspired and created his artworks, with a glass of Chianti in my hand. There is no way you have visited Tuscany and have not left a piece of your heart there. It's a magical place that is even better than anything you can imagine. And then the wine starts and never ends.

The main variety is Sangiovese and 80% of Tuscany’s wines are red. French varieties such as Cabernet Sauvignon and Merlot are cultivated with sweeping success, too. It has 5 DOCGs:

It covers the area from Florence to Tuscany and includes 14 sub-regions: Greve Chianti, Castellina Chianti, Gaiole Chianti, Radda Chianti, a piece of Barberino Val d'Elsa, San Casciano Val di Pesa and Tavarnelle Val di Pesa (in Florence) and part of Castelnuovo Berardenga and Poggibonsi (in Siena). It also has particular requirements on minimum aging and varieties permitted, except for Sangiovese.

Chianti is the wider area that extends beyond Florence and Siena, reaching as far as Arezzo, Pistoia and Montepulciano. Here the aging regulations change according to each sub-region as DOCGs apply to separate villages such as Colli Senesi and Rufina.

It is made in the wider Montepulciano area and contains ​​at least 70% Sangiovese while many producers use only Sangiovese. Minimum aging requirement is 24 months (12 months in oak barrel).

The heavy artillery of Tuscany consists of 100% Sangiovese, which in the region is also called Brunello or Prugnolo Gentile. It requires aging for 24 months in oak barrel and 5 years in total before being launched. They are deep-colored wines, with robust tannins and sharp acidity that have great aging potential.

It is one of the few white wines of the region. This makes sense if you consider that Tuscan cuisine is super rich and the fiery temperament of its inhabitants cannot easily cope with a light and aromatic, white wine.

Morellino means small black and refers to the Sangiovese of the area that is famous with that name too. This wine comes from the area surrounded by two rivers Ombrone and Albegna. Unlike other DOCGs, Morellino di Scansano does not require a minimum aging before being released.

The history of Tuscany

Chianti was the first region in Italy to be recognized for its fine wine and terroir in 1716. Later, in 1960, the first DOCs of the region were regulated along with Vernaccia. The "recipe" for Chianti, of course, came much later, in the 19th century, by the so-called Iron Baron, Bettino Ricasoli. The proportion was as follows: 70% Sangiovese, 15% Canaiolo and 15% Malvasia Bianca. Later foreign varieties were allowed in the blend such as Cabernet Sauvignon and Merlot!

The story of the well-known round, rustic bottle is pretty interesting. The bottle is called fiasco and it took its shape as they used the wicker mesh as a mold. Over the years it began to disappear as wineries used classic bottles mainly because of cost and style. Making a fiasco you see needed a pretty skilled glassmaker.

And now my favorite story! Do you know why a black rooster decorates Chianti bottles? The rooster was a symbol of the Lega del Chianti that represented many things, both financially and politically, at the time. Its symbol is associated with a medieval myth that took place during hostilities between Florence and Siena to control the Chianti area. In order to put an end to the conflict and finally establish political boundaries between the two cities once and for all, it was decided that two knights would leave their respective cities at sunrise and the borders between the two city-states would be set at the point where they will meet. Rooster’s clucking at dawn was the signal for the knights to start. The Sienese chose a white rooster while the Florentines chose a black rooster. The Florentines kept their rooster in a small, dark place and did not feed him for days. On the day of the ride, as soon as the black rooster was released, he began to roar very early, allowing the knight of Florence to depart long before the knight of Siena. Thanks to this bay, the Florentine knight met his rival at Fonterutoli, just 12 km from the Siena's starting point. Thus, Florence gained control of Chianti and the black rooster became its symbol.

The valley with the super tuscans or some of the best wines in the world. Located in Maremma, it is famous for its rich red wines from French varieties such as Cabernet Sauvignon, Cabernet Franc and Merlot. It is also home to the mythical Sassicaia.

In the heart of Tuscany there are the villages of Chianti. They come in various prices and styles such as Riserva. They are known for their juicy and tasty character as well as their versatility to accompany the dishes of the region.

Brunello's hometown is a small, beautiful village south of Chianti. Brunellos are one of the most expensive wines in the region with immense aging potential, terrific concentration and rich tannins.

Montepulciano is an idyllic place full of Renaissance churches and magical view. The wine here is Vino Nobile which means noble wine.

In Italy when you start talking about gastronomy you don't know where to stop. Tuscany is a fantastic gastronomic destination as it has almost everything. Let's start with the fantastic fresh pecorino and Prosciutto that are even made from wild boar. Two other very important charcuteries are Lardo di Colonnata and salami finocchiona with fennel seeds. In Tuscany you can find white and black truffles that are generously shaved over pasta. There is also local pasta such as gnoudi which is practically the ravioli filling without the pasta wrapping. They contain eggs, flour, ricotta and spinach and are usually served with butter sauce.

Traditional recipes of the region are ragu al cinghiale (wild boar), trippa ala Fiorentina (tripe), Panzanella (salad with multi colored tomatoes and cherry tomatoes, bread, garlic and olives) and dolceforte. Dolceforte is an ancient recipe that usually includes game and sauce with over 13 ingredients such as chocolate, balsamic vinegar, brandy, raisins, orange, chianti and spices. Special mention should also be made of bistecca alla Fiorentina, Italy's most epic steak. This is a T bone from Chianina breed, which is super thick and weighs about 1.5 kg. It is roasted in open fire and served with a very rare combination of arugula, olive oil, balsamic and boiled white beans. Magic…

Finally, in addition to the Cantucci cookies in Tuscany, they also make a very rich cake with dried fruits and nuts, panforte.

PREVIOUS Contest for invitations for Artisanal Wineries of Greece Wine Show NEXT NATURAL WINE: The most controversial term in the history of wine