THE UNIQUE VINEYARD OF SANTORINI

WHY EVERYONE IS TALKING ABOUT SANTORINI’S VINEYARD? WHY SANTORINI’S WINES ARE SO EXPENSIVE? THE REASONS ARE TOO MANY, READ BELOW TO LEARN THEM ALL! 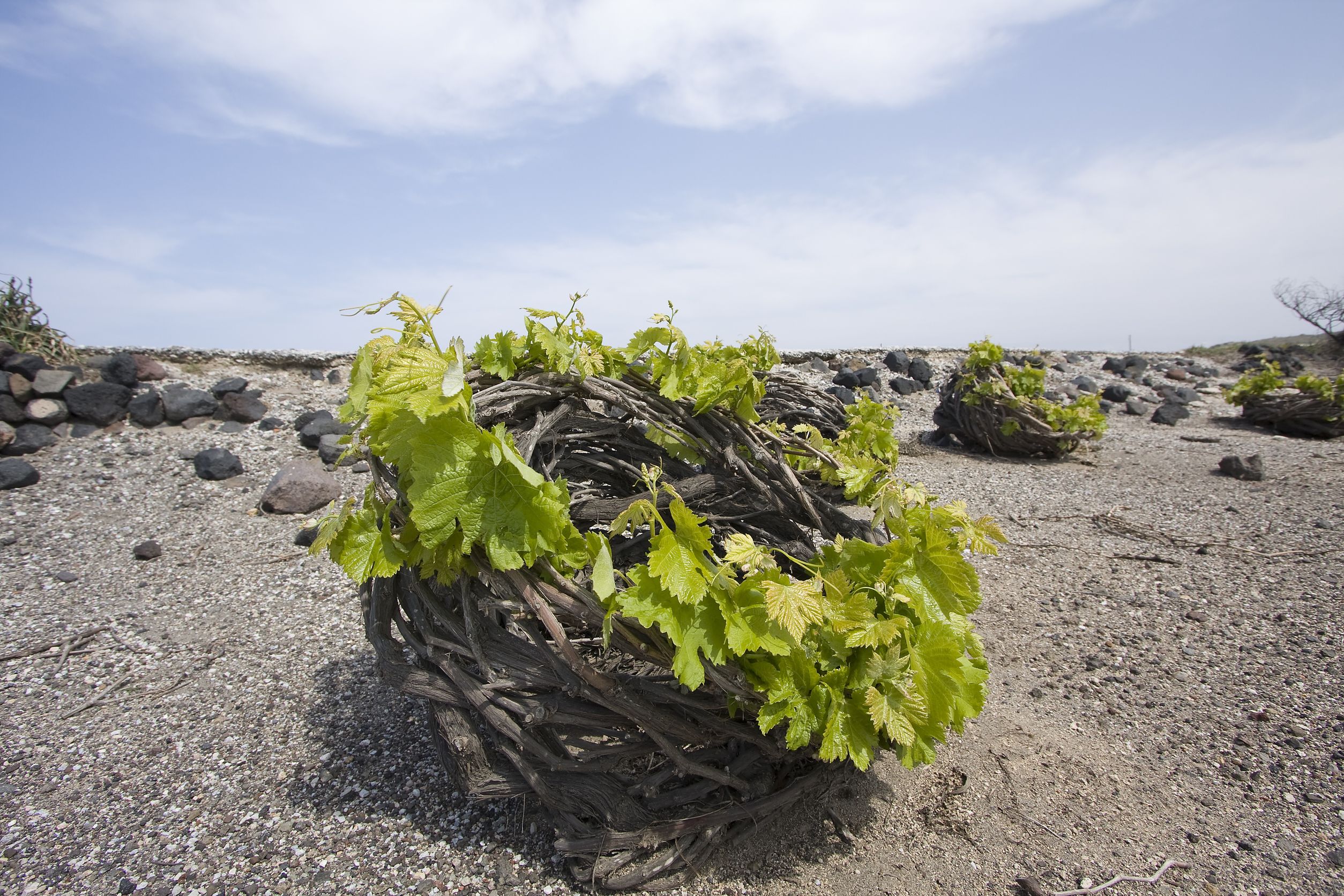 Firstly, according to archaeological researches and excavations that have taken place on the island, in Santorini and specifically in Akrotiri, they cultivated vines from 17th century BC. The inhabitants of the area vinified and sold their own wine. After the eruption of the volcano, in 1600 BC. the prehistoric vineyard was destroyed. Many plants were planted, but the vine was one of the few survivors. The reason is that its roots manage to penetrate the soil and reach depth where they find water and nutrients. At this point, it is easy to understand that it is rightly considered as one of the world's oldest vineyards, since it is about 3.500 years old.

Santorini’s vineyard, due to its particular terroir, has survived phylloxera and so there are vines that are over 100 years old. Because of its very dry climate and the strong winds, the wine-growers have created a special trellising system, the basket. The viticulturist begins to form the basket once the plant has a strong, hard trunk. When the time comes to prune it, he removes all the branches of the year except one, the strongest, which is bended almost vertically, to form a wreath parallel to the ground. Each year, the same procedure is followed until a circular formation is created, and the grapes are ripening inside of it, protected by sand and strong winds.

Santorini’s vineyard has a unique terroir with the following particular physical characteristics: 1) Volcanic soil, which is porous, rich in ash and pumice, which absorbs moisture. It is also rich in minerals. 2) Its dry climate with very rare rainfall. Summer, night fogs are the main source of moisture. On the other hand, the strong winds dry out the vine by protecting the grapes. 3) The long period of sunshine helps the grape to fully ripen. All the above contribute to the creation of wines with rich body and sharp acidity.

The main varieties of the island are Assyrtiko, Athiri, Aidani, Mavrotragano, Katsano, Mandilaria and Gaidouria. The mineral character is diffused and along with the concentration, is what characterizes the wines of Santorini. Assyrtiko of Santorini is one of the Greek varieties with the greatest aging potential. With aging it acquires petrol and honey notes that give it a Riesling like character.

PDO Santorini consists of 75% Assyrtiko (at least), Aidani and Athiri for dry wines. Whilst the sweet PDO Vinsanto wines contain at least 51% Assyrtiko, Aidani and other white local varieties. Vinsanto indicates overripe grapes that are sun - dried and dehydrated so that their sugars are at least 370g / l and mandatory maturation in oak barrels for at least 2 years. If the winemaker wants to mature it further it should be for 4 years or multiple of 4 years. Vinsanto wines can be "naturally sweet " but also " vin de liqueur wines". In the second case, the fermentation is stopped by the addition of alcohol of grape origin. A special category of dry PDO wines is Nychteri, which needs to qualify for grape ripening (overripe), alcohol (at least 13.5% vol) and mandatory maturation in oak barrels for at least 3 months.