LEARN EVERYTHING YOU NEED TO KNOW ABOUT GREEK WINE! THE ULTIMATE GUIDE OF GREEK WINE VARIETIES BY THE SOMMELIERS OF BOTILIA.GR! 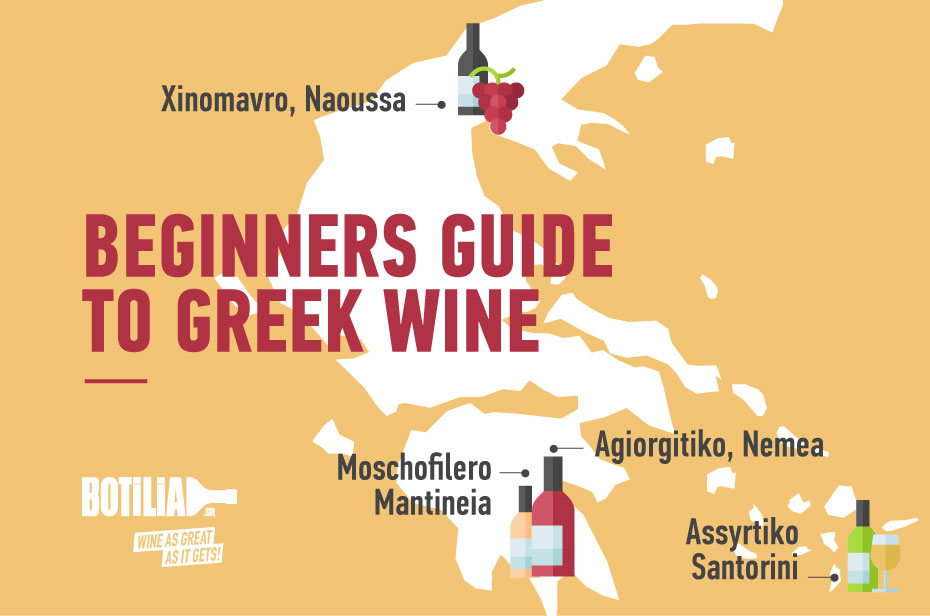 Have you ever read how, according to Jancis Robinson, Kydonitsa will be the big thing? Do you know that Assyrtiko of Santorini is in countless lists of the best wines in the world? Have you heard that Greek Retsina is on the wine list of top Michelin - starred restaurants? Greek wine is getting more and more popular, read below and find out why! 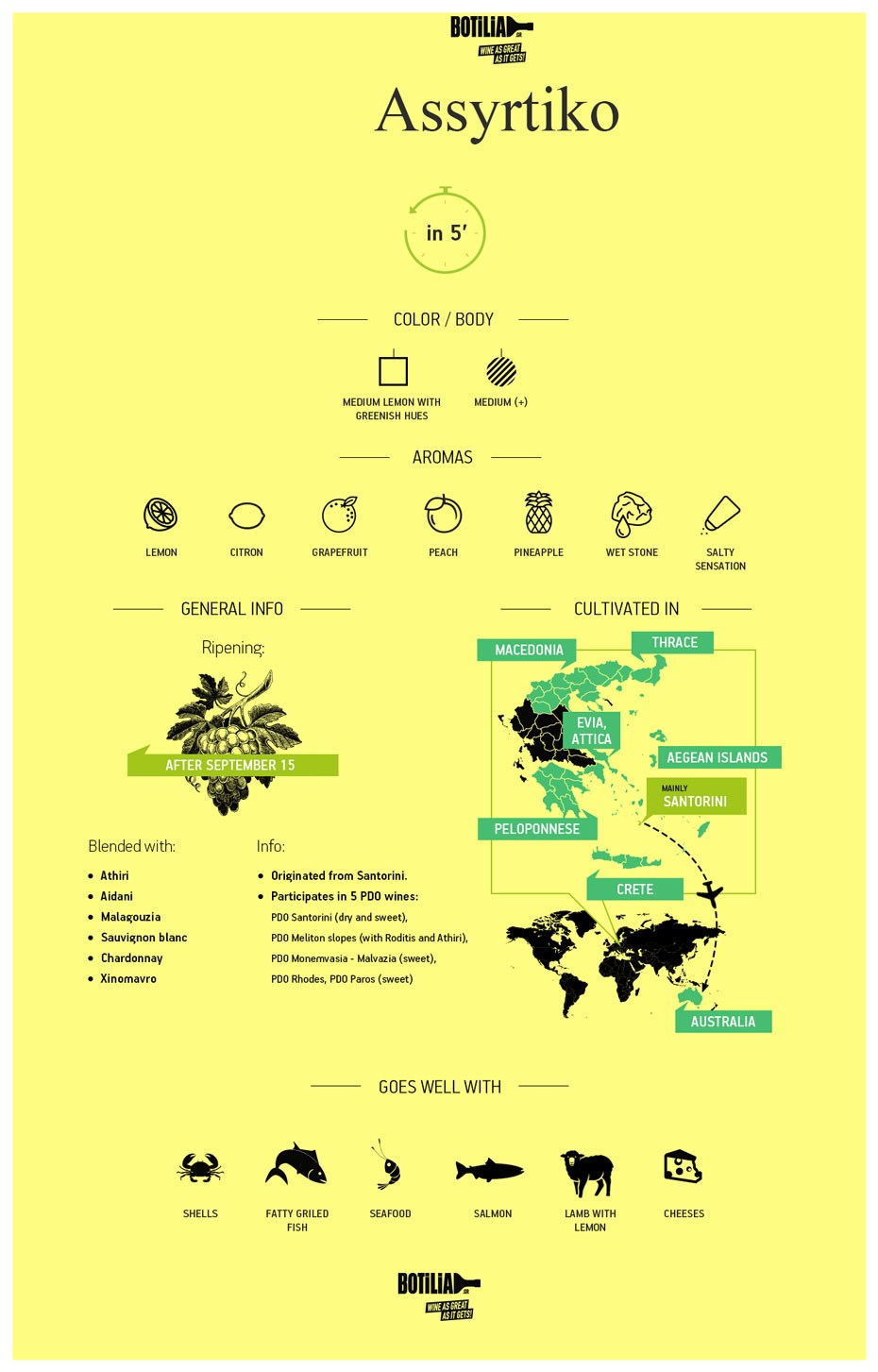 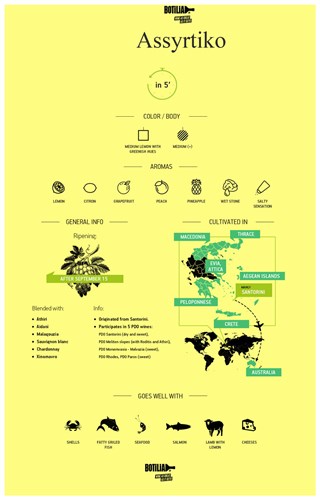 It is undoubtedly the king of white Greek varieties. Its origin is from Santorini but it is very popular all over Greece. It is a variety with high acidity, citrus aromas and mineral character. In Santorini the mineral character is emphasized by the volcanic soil and is expressed as notes of wet stone and flint. Probably they don’t sound that pleasant, but in discreet doses make the wine special and complex. In northern Greece it offers more fruit forward wines with lower acidity. It participates in several PDOs, most notably is the PDO Santorini that concerns dry and sweet wines (Vinsanto). Interestingly, it is one of the Greek varieties that make international career, specifically in Australia.  Since 2016 Assyrtiko is cultivated and bottled by Jim Barry Winery. 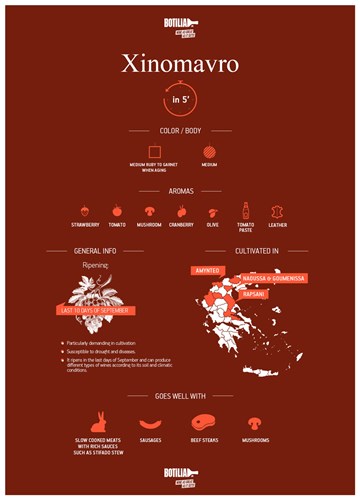 While its name means sour and black, it does not have that deep - colored skins and it gives wines of relatively bright color. On the other hand, it has high acidity and intense tannins. Its characteristic aromas are tomato (paste, sun-dried, sauce), olive and red fruits. Its origin is Naoussa, but it makes excellent wines in Amynteo, Goumenissa and Rapsani too. It participates in several PDOs, but the two essential that are single varietal is ​​that of Naoussa and Amynteo. In Amynteo it makes impressive rosé wines and sparkling wines. 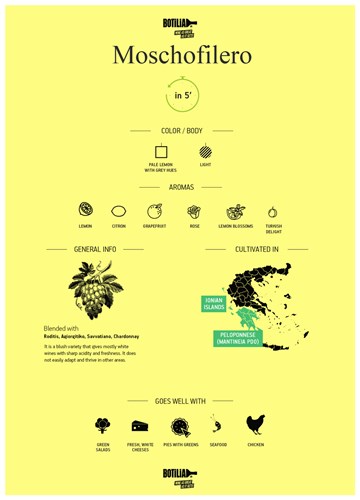 Moschofilero is the blush variety that has become famous as a white! While it has pink skin, it is usually vinified as white wine (in recent years as a rosé too). It has crisp acidity, light body and aromas of Turkish delight, rose and citrus. Ten years ago, it was the favorite wine of the Greeks because it was fragrant, light and easy drinking. In recent years it has been dethroned by Malagouzia. It is mainly grown in the Peloponnese, with the most important area being ​​the plateau of Mantineia (PDO Mantineia). 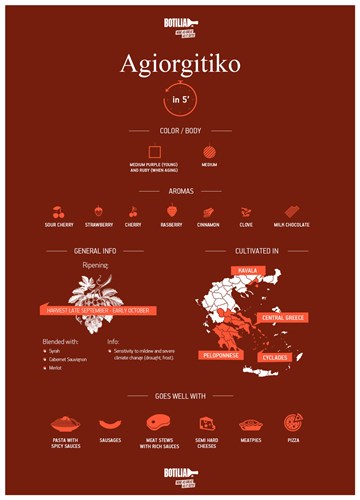 It is known with many different names such as Black of Nemea, Hercules Blood and Nemeatiko. It is a red variety whose origin is Nemea. It gives Nemea PDO wines, which are always red but may be dry, sweet or semi-sweet. Agiorgitiko usually has moderate tannins and body and balanced acidity. The characteristic aromas of the variety are ripe red fruits such as strawberry, cherry and sour cherry, sweet spices and chocolate. 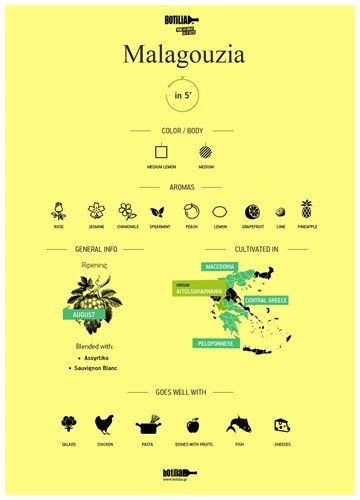 It's the Cinderella of Greek wine! The variety that almost vanished but was saved by Vangelis Gerovassiliou and Roxani Matsa, has now conquered all of Greece. Although its home is mountainous Nafpaktia, it is cultivated almost everywhere and worshiped like no other. The reason is its exuberant aromatic character with flowers, herbs, stonefruits and tropical fruits accompanied by medium body and acidity. 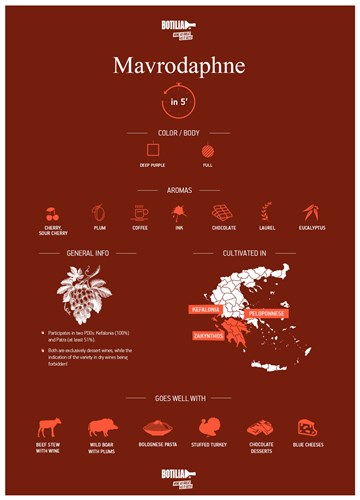 The famous sweet wine of Patra is much more than that. Mavrodaphne is a very impressive, red variety with lively temperament. It can give sweet but also dry, red and rosé wines. In Kefalonia and Patra it participates in 2 PDOs exclusively for red sweet wines. And now a little romance. Mavrodaphne is said to have been named after the beloved fiancé of Gustav Claus who was a brunette and was called Daphne. Daphne died very young and so Claus named the variety Mavrodaphni in her memory! The aromas of the variety are black fruits, herbs, coffee and cocoa. The impressive red dry wines of the variety have rich body, crisp acidity and moderate tannins.

The recipe has its roots in ancient Greece when the Greeks transported their wines in amphorae, with triremes, to the then known world. The clay pots were sealed with pine resin, and those who did not find their destination (you know, they went a bit blindly, they hadn’t GPS back then) they were returning back. In such a return they opened an amphora and noticed that the wine had changed, it had been flavored by the resin, and they loved it. Many years have passed since then and the recipe has evolved (thankfully for the better) and so the new retsinas make us proud internationally. And don’t get me started on how well they accompany the Greek cuisine: fried cod with garlic sauce, Greek salad with feta cheese, fried picarel, spinach pie, stuffed cabbage rolls aka lachanontolmades and the list never ends! Traditionally it is made with Savvatiano but other varieties like Rhoditis, Assyrtiko and Xinomavro work too.

The varieties go hand in hand with the corresponding regions so you can easily understand that the most important wine regions of Greek wine are Santorini, Naoussa, Nemea, Mantineia, Goumenissa, Amynteo and Kefalonia.  Τhe vineyards of Attica, the uprising vineyard of Crete but also some subregions of Northern Greece such as Maroneia and Halkidiki are following.

Our national Retsina and Savvatiano originate in the vineyard of Attica. Maroneia was one of the first terroirs recognized by the ancient Greeks. In particular, Maronios Oenos was famous far and wide and was even referred in Athenaeus’ Deipnosophistae. When Odysseus conquered Maroneia, Maron to save his life, gave him amphoras with old, sweet red wine. It was the wine that he later gave to Polyphemus to get him drunk.  Halkidiki, on the other hand, has its own PDO Melitonas Slopes, which mainly concerns Domaine Porto Carras and is a tribute to one of the first Greek wineries. It was established in 1970 and was the first PDO for foreign varieties.

In addition to the PDOs mentioned above, the PDO Muscat of Samos also deserves special mention. The island of the Dodecanese makes sweeping sweet wines from Muscat, which along with Retsina are the most famous Greek wines abroad.