IT IS THE VARIETY WHICH GAINS GROUND EVERY MINUTE AND HAS FANATICS ALL OVER THE WORLD. ALL YOU NEED TO KNOW IN 5 MINUTES. 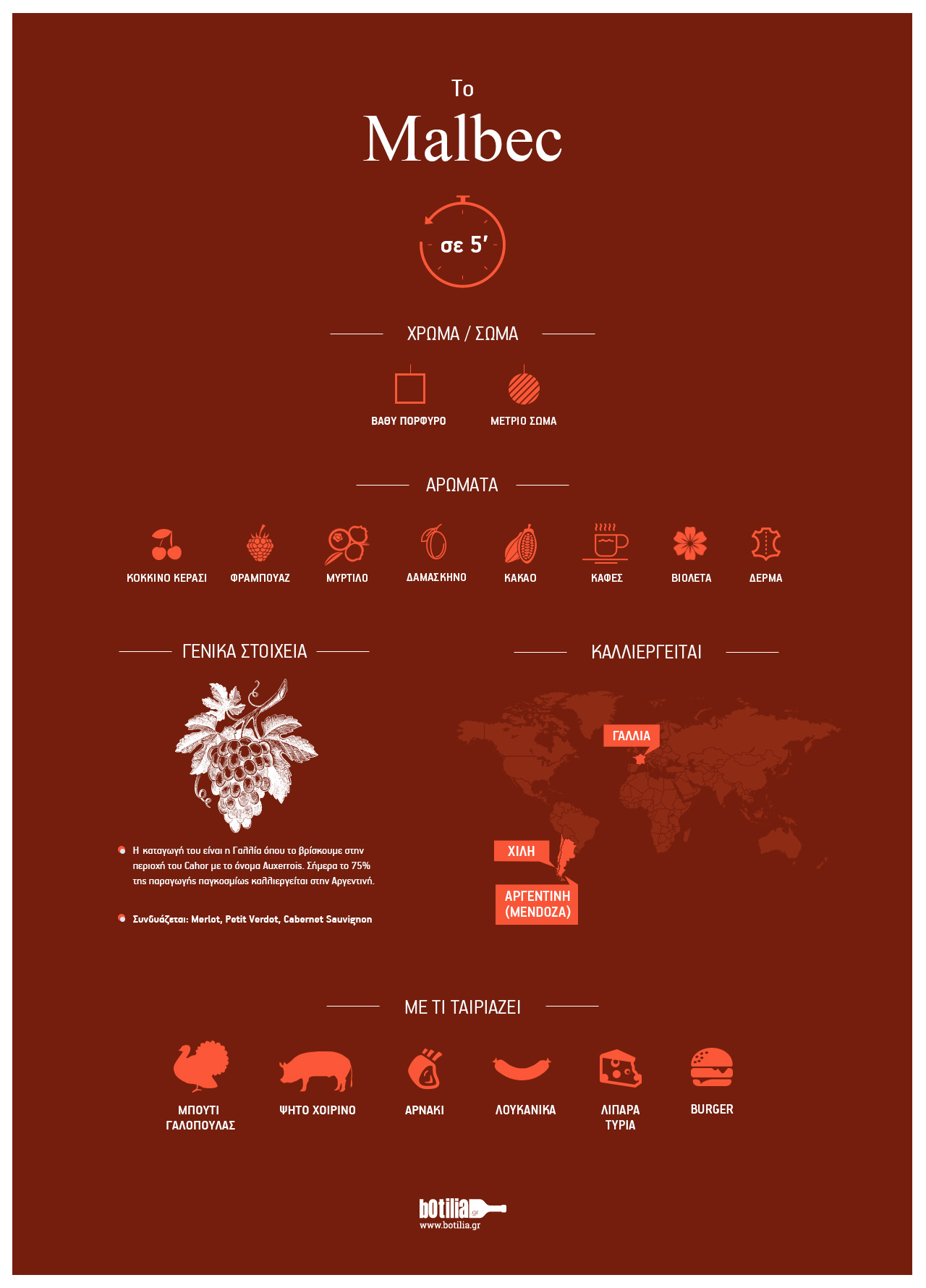 Malbec originates from France where it is mainly planted in the Cahors region, in the southwest of the country, where it is called Auxerrois. It is one of the 6 varieties allowed in the Bordeaux blend (the rest is Cabernet Sauvignon, Merlot, Cabernet Franc, Petit Verdot, and Carmenere), but is rarely used in it.

It needs great sunshine and high temperature to fully ripe and is quite susceptible to weather conditions and diseases. In 1956, a frost destroyed 75% of the total crop in Bordeaux, so crops there have declined significantly.

In the mid-19th century a French agronomist, Michel Pouget, at the instigation of Argentine wine producers, planted Malbec in Argentina to improve the quality of Argentinean wine. There, in Mendoza, with the highest altitude and the greatest sunshine, Malbec triumphed, finding its second home. More than 75% of the world's production is from Argentina and is considered to be a national variety of the country.

In Argentina, it gives wines with a dark purple color, moderate acidity (except for Mendoza areas that have high altitude and acidity is much higher), mature tannins, and intense, juicy fruit. The aromas we find in these wines are black cherry, bilberry, plum, violet, and depending on the use of barrel, cinnamon, green pepper, chocolate, leather, and tobacco. They are usually drunk fresh, but if they come from higher altitudes and have been aged in oak barrels, they acquire good aging potential. Malbec is mostly vinified in single varietal wines, but sometimes it is blended with another Argentinian variety, Bonarda and Cabernet Sauvignon.

In France, and particularly in the Cahors region, Malbec wines are even darker, more acidic, and with higher tannins. They have aromas of blackcurrant, raisin, black plum, leather, tar, and pepper, and because of their structure, they have greater aging potential.

A light and fresh Malbec due to its medium body and its soft tannins, it goes well with lighter meats such as turkey, roasted pork, but also with more aromatic dishes such as curry and fajitas.

A full-bodied, aged Malbec, loves bbq, beef steaks, lamb chops marinated with thyme and chili, as well as semi-hard cheeses such as cheddar, gouda, and, why not, smoked Metsovone and mature Gruyeres.

Many claim that Malbec is a red wine that although it’s dry, goes with chocolate. Juicy and soft Malbec pair well with chocolates with a high content of cocoa (70%) flavored with red fruits. On the other hand, its ideal partner is slow-cooked beef or chicken with Mexican mole sauce, which is based on chocolate and smoked peppers.