EN ΕΛ
POSTS Everything you need to know about Agiorgitiko in 5'!
ALL | POSTS | RECIPES | BOTILIA SPOTS

EVERYTHING YOU NEED TO KNOW ABOUT AGIORGITIKO IN 5'!

IF YOU NEED TO KNOW TWO GREEK VARIETIES, AGIORGITIKO IS DEFINITELY ONE OF THEM! LEARN EVERYTHING YOU NEED FOR THE LANDMARK VARIETY OF THE GREEK VINEYARD! 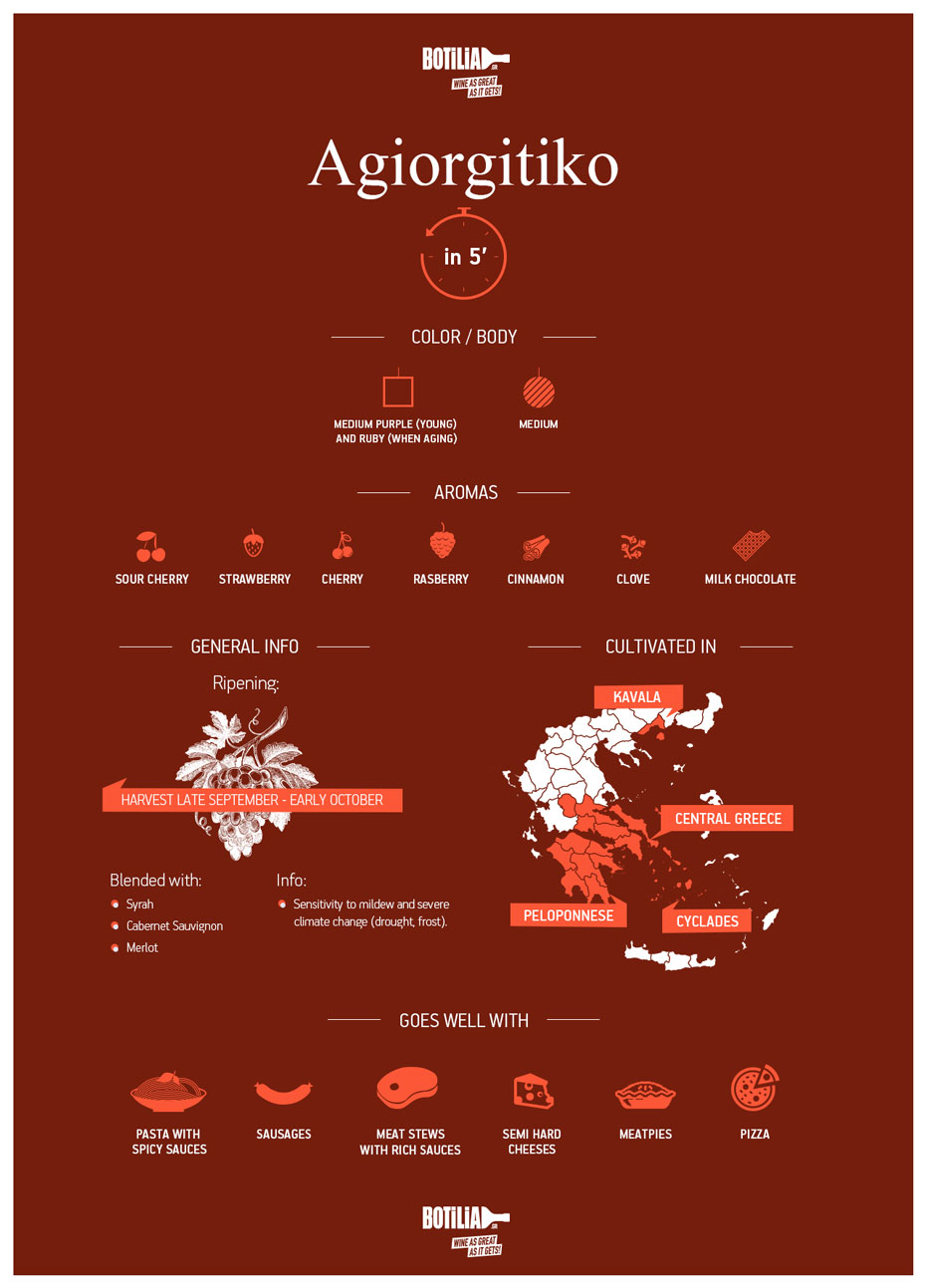 Agiorgitiko along with Xinomavro are the 2 noble red Greek varieties. Its homeland is "Little Burgundy" or Nemea, which has been designated since 1971 as the zone for the production of Protected Designation of Origin (PDO) wines.

It is a very productive variety and shows intense sensitivity to peronospora as well as to intense climate change (drought, frost). The grapes of the variety are medium sized and rely on cylindroconic bunches. The flesh is relatively soft with a thick skin and a pure cyan-black color.

Of particular interest is the range of wine styles it can produce: from fruity rosé dry or semi-dry to bold reds but also desserts. The barrel suits it well, but the fresh versions of the tank with the aromas of fresh and juicy red fruits are fascinating.

Agiorgitiko is a variety with great history! Originally, Nemea is identified with Phliasia, the place where Phlias (son of Dionysus) reigned and according to the tradition, there was produced the royal wine that Agamemnon drank in Mycenae. Also according to myth the Agiorgitiko was the blood of Hercules when he killed the lion of Nemea, completing his first labor.

The name of the variety comes from a village. In 1838 the municipalities of Fliounta and Nemea were founded, and in 1840 they merged into the Municipality of Nemea with Ai-Giorgis village (today's Nemea) as capital. It has other names like Hercule's blood, Nemea's black and Nemeatiko.

The variety usually gives wines of moderate body and acidity, with moderate, soft tannins. The color in the glass varies from pale rose to medium rose when talking about rosé wine. In red versions, the color may vary from medium-purple in fresh wines and moderate to ruby ​​in the aged ones.

The aromatic characteristics of the variety are small red fruits such as strawberry, cherry, blackberry and the toffee that is found in the unoaked red or rosé wines. In a classic Nemea, the aromas of red fruit jam, sweet spices and chocolate, play a leading role while the aromas of nuts, tobacco and coffee are following. In dessert wines from Agiorgitiko the aromas of raisins, mocha and dried plum steal the show. The oaked versions are wines with bold character and aging potential of 5-10 years.

On the other hand, a fresh Agiorgitiko is considered a terrific gourmet chameleon, as it can go well with any kind of appetizer - seafood or else, light dishes of meat and fish (like mackerel with tomato sauce). A rich and oaked Nemea is asking for beef stew, steaks, sausages, pork with quinces, Smyrna meatballs and moussaka!

PREVIOUS Froutalia of Andros NEXT The Salad of Kalymnos - Mirmizeli