EN ΕΛ
POSTS Savvatiano: everything you need to know in 5'!
ALL | POSTS | RECIPES | BOTILIA SPOTS

SAVVATIANO: EVERYTHING YOU NEED TO KNOW IN 5'!

SAVVATIANO BEGINS TO TAKE THE PLACE IT DESERVES. FIND OUT WHY IN 5 '! 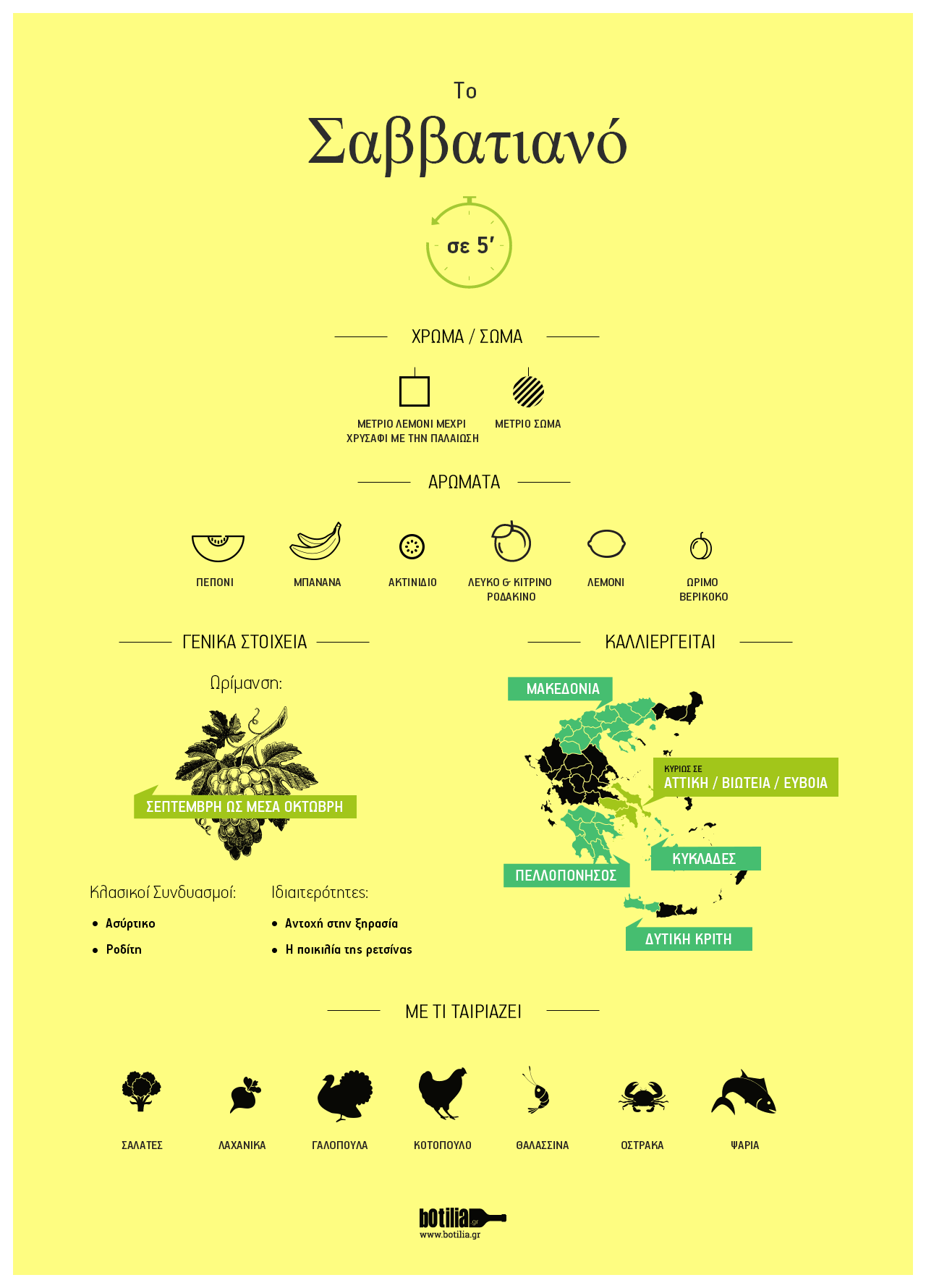 General info
It is one of the most widely cultivated varieties in Greece and its impressive resistance to drought and heat has made it a protagonist in the Attic vineyard, which is one of the warmest and most dry of Greece. We usually find it in cup-shaped or linear pruning. The combination of non-irrigated, old vineyards (50 years on average) and modern winemaking techniques results in moderate aromatic wines with refinement, satisfying acidity and aging potential.

It makes great dry but sweet wines too, which are very popular in Attica. Unlike most Greek white varieties, it is "very flattered" by the maturation in oak barrel, acquiring interesting aromas of honey and dried apricot. If it is to be blended with something, it is usually with Assyriko or Roditis.

History
Savvatiano is an indigenous variety of Attica. From there its cultivation was transferred to Voiotia, Evia and even on the Black Sea coast according to Homer. It is also known by other names such as Kountoura white, Asprouda and Perachoritiko.

Savvatiano is the variety that retsina is based, the most famous traditional Greek wine. The "recipe" is presumed to have been created thousands of years ago when the wine was stored in amphorae. During the Mycenaean era, Greek wine was transported to the ancient world in amphorae, which were sealed with pine resin. So they noticed the particular aromas that resin gave in wine and begun to use it. Unfortunately, retsina was later abused when excessive amounts of resin were used trying to "mask" defective and poor quality wines. Today this has changed as many young winemakers, with careful vinification of  Savvatiano and other varieties, have managed to produce retsina with distinctive pine aromas, allowing the special characteristics of the wine to shine through. So retsina slowly conquers the position it deserves.

Characteristics
Savvatiano usually gives high-quality wines with moderate acidity and moderate body. The color in the glass may vary from lemon-green to gold, depending on vinification and aging.

A fresh Savvatiano has aromas of pear, peach, banana, melon, lemon and white flowers. With the barrel maturation it acquires notes of honey, dried apricot, butter and caramel.

Savvatiano has proven it has excellent aging potential and is developing very nicely over time.

Combination with Food
It accompanies pleasantly salads, light dishes with poultry and citrus or vegetable sauces, fish and seafood broiled or sauteed. Now if we're talking about retsina things are getting serious. Perfect matches are shellfish, saganaki with white sauces or even pork with celeriac for the bold ones! The oaked versions demand richer and more complex dishes such as Carbonara, smoked ham with honey in the oven, salmon with orange sauce and Christmas stuffed turkey!

PREVIOUS Fennel fritters NEXT Malagouzia in 5'!