PUT THE WINE INTO THE POWER SOCKET!

AT VARIOUS TIMES WE HAVE SEEN A LOT IN THE WINE WORLD. WINEMAKERS USE ANY BIZARRE METHOD THAT CAN BE IMAGINED HOPING TO PRODUCE THE NEXT BEST WINE IN THE WORLD. 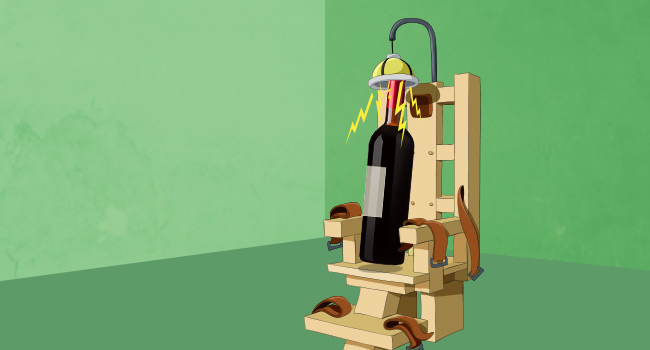 At various times we have seen a lot in the wine world. Winemakers use any bizarre method that can be imagined hoping to produce the next best wine in the world. Some of these are successful and some are... less successful. We have already seen artificial drying of the soil, vine ripening with the escort of sonnets and classical music, wine aging underwater. We hadn’t seen electroshock… until now!

Imagine like it’s an electric chair, designed to make you better, not dead. It all began in 2008, when Xin An Zeng, Chinese wine lover and chemist of Technology University of South China, thought to experiment by passing electricity through wine. Results surprised him. Over 1000 volts for a short time, and wine not only did not die, but its aromas were enhanced and significantly improved.

Further experiments showed that if a wine is exposed to electric pulses , it seems to have similar impact as time has to the wine. Certainly, it was amazing that scientists were able to achieve the effect of aging for years, in less than three minutes of exposure to electrical pulses. Specifically, wine’s exposure to these pulses for about 2 minutes, causes a development comparable with that, it would have, if it was matured for 5 years under normal conditions. Recent experiments of TEI of  Oenology of Athens managed to fool wine connoisseurs who tasted wines produced by those two processes.

According to patent (US 2015/0184117 A1), the "Device for accelerating the aging of wine” do just that, it accelerates considerably (several hundreds of times) the natural process of maturation and the time it takes a red (mostly) wine to reach the desired point of maturity for consumption. In this way, wines will be ready much sooner and wineries can sell their products earlier, reducing storage costs, associated with long aging.

PREVIOUS Malagouzia in 5'! NEXT Steamed mussels with white wine and black pepper