LATEST TREND OR RETURN TO THE PAST? AMPHORAE WINES ARE HERE AND SEEM TO HAVE A LONG WAY TO GO! 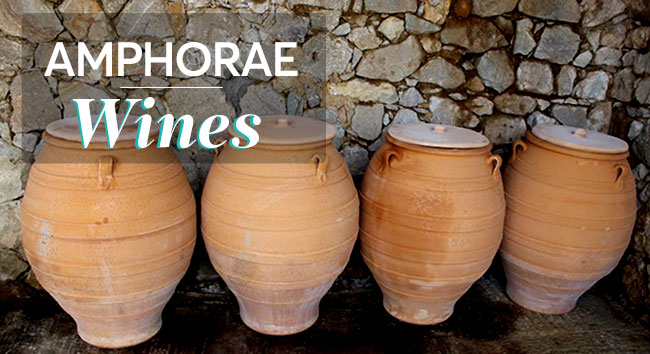 In recent years, there has been a trend of making wines as natural as possible, with the smallest possible human intervention, without the addition of sulphites and other additional factors. The use of amphorae for fermenting or aging wine is a method that has been revived today and is constantly winning over producers and consumers.

Archaeological excavations have brought to light finds from Kvevri (as clay amphoras are called in the local language) in South Georgia dating back to 6000 BC. They were usually made of clay, they had different sizes from 20 to 10000 liters and could either be buried whole on the ground or placed over it. The same technique, with very small differences, is being followed today.

As with barrels, size, wood and burning play a decisive role in the style of the wine that will be produced, so it is precisely the same with the amphorae that have their own diffirent styles, in ways of production. The size of the amphora, the clay cooking temperature and its composition, and finally the type of bees wax to be used to lather its interior are factors that decisively influence the final result. The main reason that makes producers prefer their use is the micro oxygenation allowed by the clay in wine. The permeability of an amphora to oxygen may be virtually non-existent, as is the case of a closed tank or larger than any oak barrel. The lack of aromatic compounds, such as those from oak, protects the fruity character of the wine, while many claim that the use of the amphorae enhances its minerality and its earthy elements.

It could not be such an interesting trend to miss the Greek scene. Young, vigorous wine makers with taste and vision have turned to this very interesting winemaking by giving unique wines that have won audiences and critics. One of the first was Jason Ligas, where he has turned vinification in amphorae to art, with impressive results. Then, Domaine Foivos in Kefalonia, vinifies a special Mavrodaphne in amphorae that has intrigued even Robert Parker. Nikolaidis Brothers of Anatolikos Vineyards were studying the traditional vinification method in ancient Greece and after numerous experiments, they have created two iconic wines. Natural Orange and Natural Red are phenomenal examples of this winemaking technique, with a completely gastronomic character that allow them to be in the wine lists of the best restaurants! Tetramithos Winery creates a perfectly traditional retsina in amphorae, referring to the way its special "recipe" was discovered.
Finally, we ‘ve heard about Domaine Tatsis and a very special white wine in amphora that is being prepared...