5 SUMMER MOVIES AND 5 WINES TO ACCOMPANY THEM

SUMMER HAS ARRIVED BUT UNTIL YOU MANAGE TO LEAVE FOR YOUR VACATION YOU CAN TRAVEL WITH A NICE MOVIE THAT WILL BRING YOU CLOSER TO YOUR DESIRED GOAL. CAN YOU IMAGINE ANYTHING BETTER THAN COMBINING IT WITH THE RIGHT WINE? 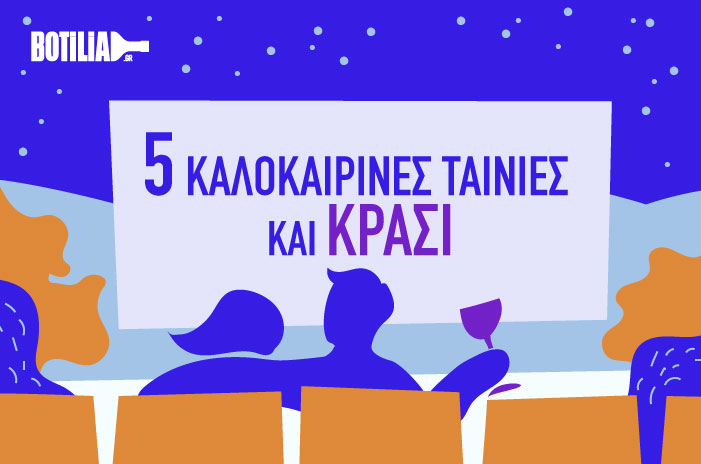 So, let's see below five summer movies and their movie-wine pairing:

I believe it's the ultimate summer movie. Escape from civilization to a magnificent beach. Swimming in emerald waters, fishing, flirting and survival mode in general. Aiora of Moschopolis Winery, as its name implies, is an ideal combination. Crisp acidity, summery aromas of citrus, peach and apricot, and a delicious aftertaste ......

This movie, that is filmed to the beautiful Salina, a small volcanic island of southern Italy in the center of the Aeolian sea, has the necessary summer mood. The film tells the story of a local young man that while he tries to avoid becoming a fisherman like his father, he finds work as a postman, ending up with the correspondence of Chilean poet Pablo Nerouda. The protagonist, although he is almost illiterate, he begins to read Nerouda's poems and tries to overcome his big problem, his shyness flirting. Nostalgia, romance, love, poetry and a magical southern Italy. I think  that Valpolicella superiore of Bellora winery fits perfectly with the bittersweet feeling of the film. As the poet says, '' In one kiss you will know, all I have not said ''. Perhaps a sip of Valpolicella can do the trick...

American film director Spike Lee, on the hottest day of summer and how everything reaches to boiling point in a Brooklyn neighborhood, reminds you of that summer, you were left in town, while all of your acquaintances were on vacation. What can we say; There are these memories, too. The heat that the film exudes needs definitely something very refreshing to cool you down. A frozen sparkling wine from Karanika estate, like Brut Speciale, is an ideal combination.

The endless blue, the film of Luk Besson shot in 1988 is definitely a movie that smells like sea. Amorgos, Ios and Taormina of Sicily are the enchanting places that this movie was filmed and made our country famous for its crystal blue waters. The story is pretty much known. We are watching the story of two friends, free-diving champions, from their childhood to adulthood. Different routes, intense competition but the same love for water and the sea. The salt of the sea fits with the absolute wine of summer, Assyrtiko. Santorini Vassaltis is a wine that has this salty, but also mineral, character that reminds of the sea rocks burning in the summer sun.

"I never had any friends like those I had when I was 12 years old," confessed the writer, a hero of the film recalling in his memory a journey full of unexpected adventures that stamped the friendship of four teenagers during summer, helping them discover their selves and ultimately life. I do not think there is anyone who does not get emotional while watching this movie again, and reminiscent of his own childhood, but also of his friends who have stayed or just passed through his life. What you need is a magnum of Moschato Spinas from Karavitakis Vineyards to have a drink with your friends, remembering good old times and organizing new ones.