ALL YOU NEED TO KNOW ABOUT THE KING OF ITALY, SANGIOVESE, IN 5 '! 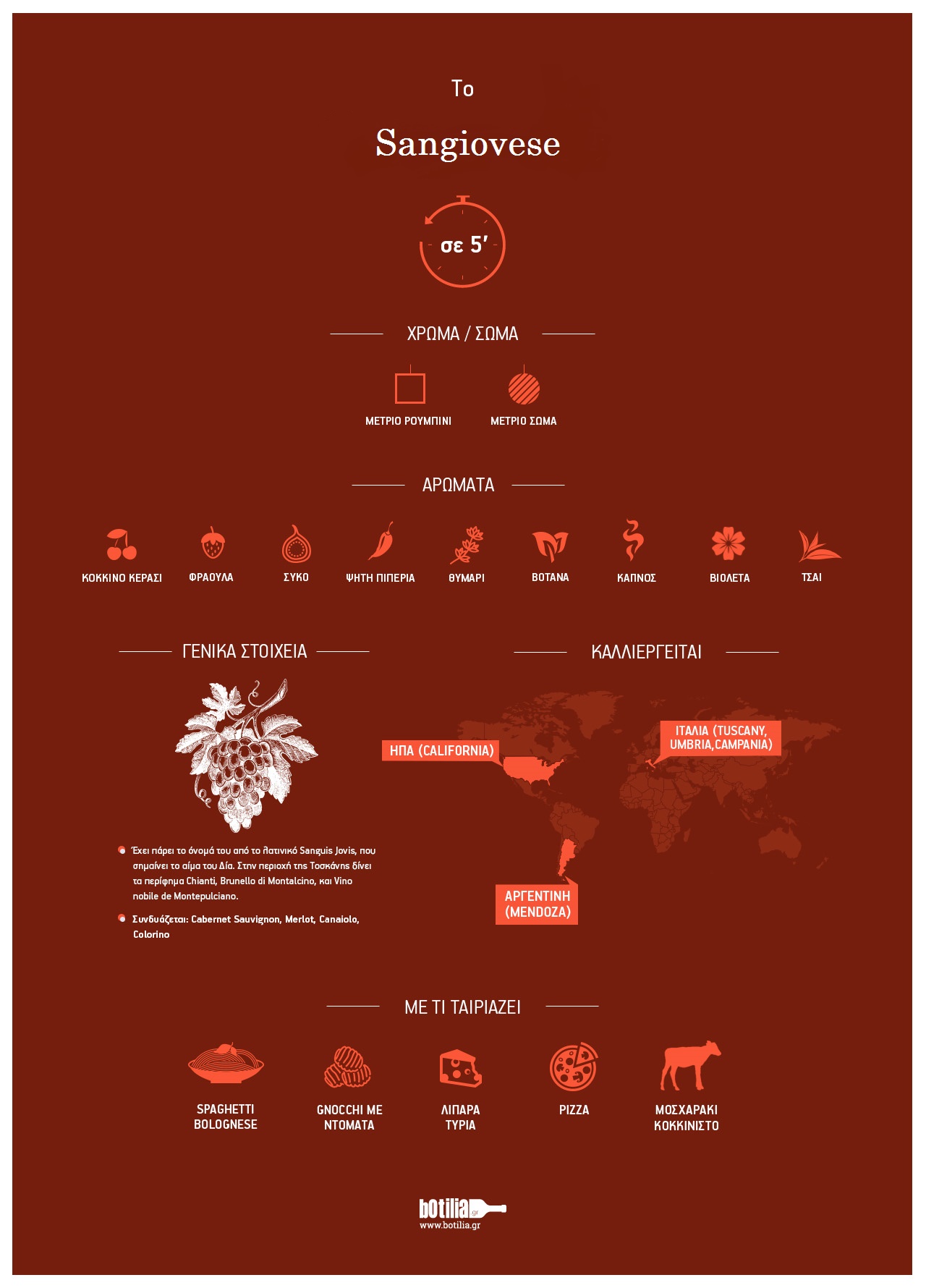 Sangiovese is the most cultivated variety in Italy. In the Greater Tuscany area sprawling between Florence and Siena, Sangiovese gives the famous Chianti Classico. The term classico includes the most historic areas of the Chianti zone and was given to distinguish them from other areas that produced very large quantities of low-quality wine, which gave Chianti a very bad reputation in the past. Classico must contain at least 80% Sangiovese (the remaining percentage usually consists of Canaiolo, Colorino, Cabernet Sauvignon or Merlot) and must have at least 12% alcohol and twelve months of aging.

A little further, near the town of Montalcino (42km far from Siena) Sangiovese gives the famous Brunelo di Montalcino. Brunelo is made exclusively from Sangiovese, aged for at least 2 years in oak barrels and is considered to be one of the best Sangiovese in the world.

Sangiovese can be considered a chameleon in the sense that it adapts to different climates by giving different styles of wines. Apart from Italy, it is very widespread in Argentina, due to the great influence Italian immigrants have in the country, and it gives great results in California but also in several areas of Australia and Chile.

It is a variety that ripens later on and its main characteristic is the high acidity and medium (+) tannins.

From a Chianti classico we expect a medium-bodied wine with medium (+) acidity and robust tannins. Typically, the aromas we encounter are those of cherry, strawberry, violet and rose (sometimes in dried form), but also more savory notes such as paprika and nuts. It is very pleasant when fresh, but can age for at least 3-4 years.

Chianti riserva has better mouth structure and greater complexity. Fresh fruit is enhanced by more earthy aromas such as mushrooms, tobacco and leather. The tannins are ripe and round (sometimes also strengthened by the barrel) and give the wine a greater aging potential that often touches 10 years.

Brunello di Montalcino, made exclusively from Sangiovese brunello, has a higher acidity, robust tannins and a richer body, so it unfolds its "virtues" at least 8-10 years later. Cherry, strawberry, blueberry, violet, dried fig, licorice, coffee and chocolate are blended in a complex set making Brunello the king of Sangiovese with an aging dynamic of over 15-20 years.

Its high acidity and moderate body make it an excellent companion for pasta with red sauce, pizza, rich summery vegetable stews such as imam and roast pork.

Chianti loves slow-cooked beef or wild boar, with papardelle as well as soufflé with the local cheeses like the fresh pecorino. Brunello is very robust when young, so it asks for the famous bistroca Fiorentina cooked rare. When it is aged it acquires an earthy character that fit like a glove with some Tuscan truffles, married with fresh pasta, meat or even cheeses.

An aged Sangiovese accompanies ideally cooked meats and game, such as hare, pheasant and pigeon, slowbraised, as well as hard, mature cheeses such as aged pecorino and Parmesan.