NIKOS KARAVITAKIS IS GIVING UP EVERYTHING TO WORK WITH LALOU BIZE-LEROY, HE PAIRS SOUVLAKI WITH MUSCAT OF SPINA AND IF HE COULD, HE WOULD PLAY GUNS N’ ROSES MUSIC TO HIS VINES! AND NO, HE SAID A LOT MORE! 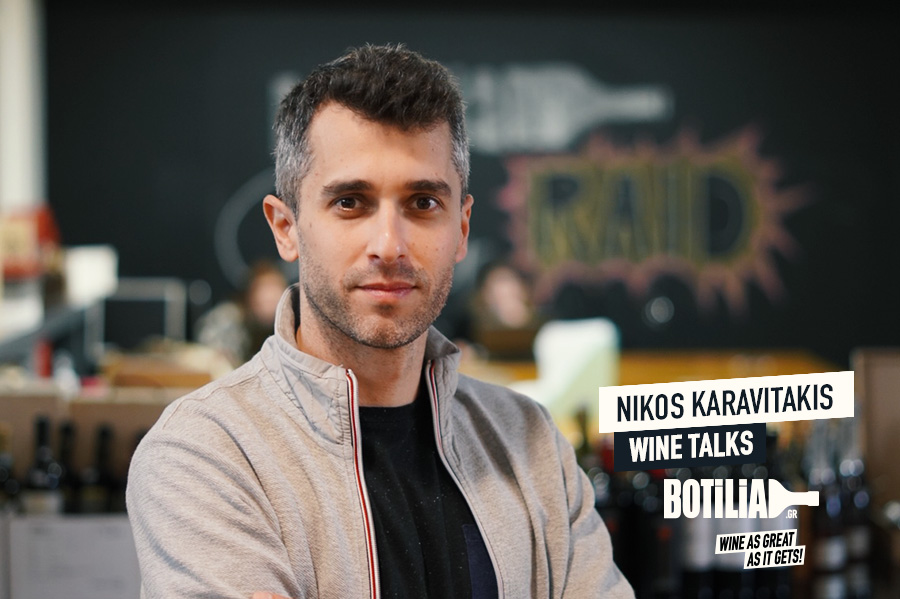 Nikos is the new blood of Karavitakis Winery, one of the most uprising winemakers in Greece and according to members of Botilia, the "Best Young Greek Producer". In recent years he has taken charge of the family’s winery in Chania, Crete and his tough work has made the winery a reference point for Cretan varieties both in Greece and abroad. Nevertheless, he remains an awesome guy who has a lot to say!

At some point, it crossed my mind to study Law, without any particular reason or a chair to inherit. Then, of course, the friction with the winery tied me up and I decided to do it myself. Of course, when you are young you just see the magic, you do not see the hard work behind it.

I would wake them up with Por Una Cabeza (without lyrics to avoid a revolutionary tone), I would continue with Guns and Roses, Sweet child o 'Mine to get the day started and at night to calm the tones and remind them where their roots are and what they hold in their “hands” I would play Vasilis Skoulas' "Sun God".

I wish I had only said it once. But I will say the most recent one because otherwise, I will write paragraphs.

It was a Condrieu 2015 from Cuilleron. The wine was not particularly expensive nor famous but I was so impressed with the oak integration that I have never tasted such a wine in Greece. At the same time, the variety was so pure and so fresh after 4 years of vintage without a trace of oxidation, that I wish I could make a Vidiano at this level.

A painful question since a short time ago someone broke into our cellar removing a lot of wines. I do not know exactly how many wines I have, as I have been collecting many years Greek and international wines and I have also a great collection from my father. So I would definitely say over 100 labels.

I think one of the most expensive wines I've ever tasted is a DRC, Richebourg 1985, a few years ago and was amazing. As for the most economic one definitely a Chenin Blanc from Delaire Graff Winery in South Africa, which cost € 4.5 and was really fantastic for that kind of money.

Although I haven’t paid a visit to Burgundy yet, I feel that I’ve learned a lot from my trip to South Africa. There, I really understood what terroir means. I would go to America without a return ticket, no other country offers so many opportunities in our industry.

Without a second thought, Ms. Lalou Bize-Leroy. What can I say for this woman... The fact that she was the one who drove Domaine de la Romanee - Conti where it is today? The fact that she is an excellent manager and a winemaker with incredible wines now coming out of her winery? The fact that she behaves in her vines as if they were her children? An extraordinary personality with a wide range of skills in wine. Not only in production but also in trade.

What else; VIDIANO! Anyone who knows me i think would expect my answer!

With Apostolos Thymiopoulos. We’ve known each other for several years, and I think that what he has managed with Xinomavro is very difficult. To transform Naoussa’s wines from bold wines for tough tastes to wines with a finesse that everyone in the world is eager to drink. And I know he worked hard for that, he put a lot of himself in there and my perspective is identical to his.

Bottling. When we have reached this point my work is done.

My greatest success, I think, is to currently produce wines 85% from indigenous Cretan varieties, while 15 years ago it was almost the other way around. My biggest reward for this is the wine I love, which I follow 120% of its course and is none other than Elia Vidiano.

My biggest fail in wine is that in my first steps I tried to reach some wines and didn't think to surpass them. I quickly realized that with this mentality I had put my wines into a mold. They didn't reflect my character. Fortunately, I learned my lesson quickly. I believe...

I think Elia Vidiano 2017. The first release. And here fits the saying "Your first love is eternal". Yes, I still have bottles.

I'm ashamed, but you asked me to be spontaneous. Souvlaki with Muscat of Spina. The word "bad" is not enough to describe the grandeur of this failure.

Crete. Don't say I’m being tendentious, but it is a place with a great variety of terroirs, plenty of diamond old vineyards, good ripening conditions, critical size to support production, very strong history, and excellent gastronomy. I think all the above are enough to draw great interest.

I want us to be able to have a serious identity as a country. It will benefit us all. To do this we need to take our vineyards seriously and our wines to show character and consistency. All others will follow.

Given that I exclude Cretan wines for redundancy I would say: