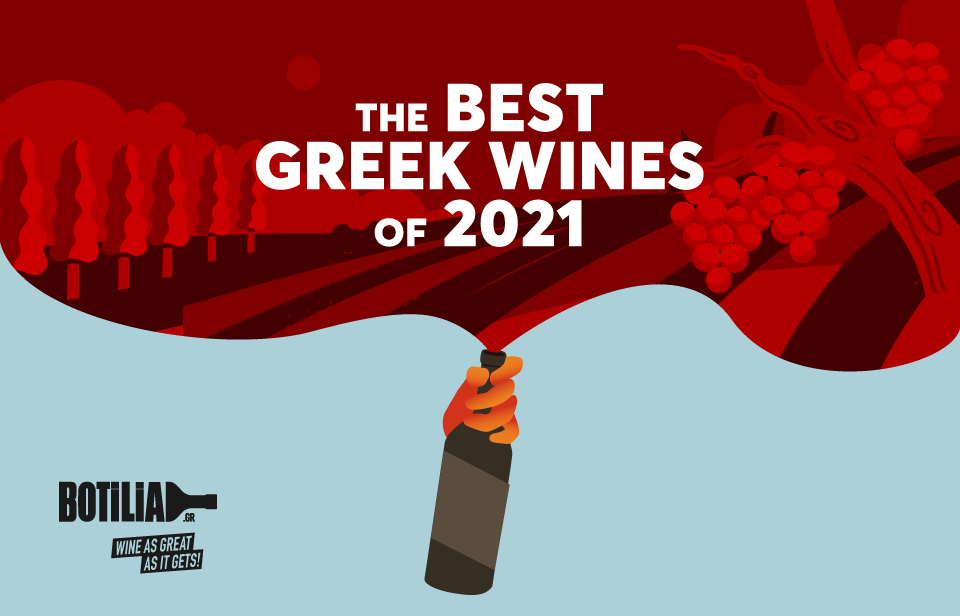 Just like every year the team of Botilia.gr presents the list of the Best Greek wines of the past year. The list of the Best Greek Wines of 2021 results from the preferences of 50,000+ members of Botilia. The preferences are measured by the purchases and ratings among the hundreds of Greek wines that passed through Botilia.gr last year. To become more specific about the process, Botilia's team makes the initial selection among several thousand wines that pass through its glasses during the year. The best of them is selected, both in terms of quality and value for money, and they are available to both members of botilia and the general public. Botilia members have the opportunity to rate the wines they have tasted. We note that they can only rate wines that they have already purchased (and therefore tasted) in order for the process to be more clear.

We loved F by Foivos 2020 by Foivos Papastratis from the first moment it entered our glass! It is one of those Greek wines that literally pull you by the nose since the aromatic character of Moschato with flowers and Turkish delights is not easily hidden, while at the same time its combination with Assyrtiko is really incredible. This delicious, aromatic and well-structured white wine was one of the wines that were put on the spotlight this year as it starred in the anniversary dinner of the President of the Hellenic Republic.

Naoussa 2016 Kelesidi Winery from the "Grand Cru" vineyard in Giannakochori of Naoussa is probably one of our (and yours) most beloved Xinomavros. It balances gracefully between modern and rustic vinification and can satisfy everyone as long as it is combined with the right dish. This wine is made for gastronomic pleasures and exuberant dishes.

Bold is a "Rioja" from Pontikiana of Chania. The terrifying concentration of this Tempranillo along with the aging in French and American oak barrels for 24 months, make Bold reminiscent of Spanish Rioja even if Chania is so many kilometers away. It is a big must for those who love the intense, rich red wines that you may cut with a knife.

Stelios Zacharias has managed to make one of the most delicious Greek rosé wines, combining the aromatic Sauvignon Blanc with the powerful Mouchtaro. Its pale color combined with an explosive aromatic character that, if you close your eyes, reminds you a bit of New Zealand, and leaves no one unmoved. Then comes its crisp acidity and its intense fruit that make it a passe-partout and the ultimate party wine, since there will be no one who does not love it from the first sip.

This year it was proclaimed the best rosé in the country in the Thessaloniki Competition and for us it is not a surprise since we know what an incredible wine it is. Only the best grapes are used for its production, from the oldest vines of the historic vineyard of Kali Riza, in the area of Agios Panteleimon. Its elegant delicate color, the aromas of strawberry, rose and sweet tomato makes it truly irresistible.

The champion of the badass rosé category, Rose de Xinomavro, steals the show every year! It may not have the pale color of Provence roses but you do not need it at all, since what characterizes it is its complexity, its tomatoey character and its impressive structure, which you rarely find in rosé wines.

15. Tear of the Pine Kechris Winery

The Tear of the Pine Kechris Winery is a wine that has impressed the world. It is the first premium Retsina that was ever released and the one that pioneered the fight against the bad reputation of Greek wine in general. If you see the awards, it has collected you will be really impressed. Infinite gold medals and the highest distinctions in the biggest world competitions fill up pages. On the other hand, the lists in which it participates worldwide, are breathtaking!

The big red wine of the winery of successes impressed those who managed to taste it! Pinot Noir is perhaps the most compelling red variety on the market, but Germanis managed to tame it. Fermentation in a stainless-steel tank with ambient yeasts, long extraction, maturation in very old large barrels for 12 months and additional maturation with Assyrtiko wine lees for another 12 months in oak barrel gave a really impressive red wine.

Ramnista 2017 Kir Yianni is an example of elegance and balance. The year 2017 is one of the most amazing ever and that is why it has been loved by both the audience and the critics. The ideal microclimate and the touch of the creator, contribute to the creation of an exuberant Xinomavro of the modern school, which flirts with the rustic one as much as needed! The wine fermented in French oak tanks and after that, it matured in French oak barrels of 225 and 500 liters and radiates finesse without being deprived of an impressive, bold structure.

Le Sang de la Pierre is definitely one of the most impressive Agiorgitikos that have been released so far! It is sold out almost immediately every year and the reason for this is its dense fruit concentration, its velvety structure and its impressive complexity. Steadily, among the favorite reds and with a fanatical audience.

It is a reference point for both Naoussa and the modern style of Xinomavro. Every year it appears among the wines that we love and you love. The charming version of this Xinomavro, with the rich and juicy red fruit, the delicate floral character and the silky tannins managed to make even its sworn enemies of the variety love it!

Adagio Day Five Jima Winery is the day after Rue de Soleil that we know how much you loved it. This wine really excited us from the very first moment, both with its New World / Californian style, as well as its beautiful and special label! From what the numbers show, it didn’t excite only us but also you and you are not wrong! The blend from Merlot (75%) and Cabernet Franc (25%) fermented with selected yeasts and matured in 225-liter oak barrels (40% new), for over 12 months, composing a complex and exuberant red wine.

Rilancio Sangiovese 2007 Karipidis Estate is a collectible wine since it is a one-time thing and in a special anniversary bottling! The wine fermented and matured in oak barrels for 2 years, then it was bottled and matured in the cellar of the winery until today. The reason for this was that Rilancio Sangiovese was a special bottling intended for abroad, nevertheless they decided to keep some bottles in the winery to see the evolution of the wine over time and so it reached our hands. Fortunately!

The pride of Nikos Karavitakis, his Vidiano, in its best version, could not be missing from this list! Some even say that it is the best Vidiano in the country, they know better. Elia Vidiano comes from a vineyard located at an altitude of 640 meters and bore fruit only for 1,450 valuable bottles. Part of the wine matured in oak barrels from the Vosges Mountains, for at least 6 months. The result is elegant, sophisticated and delightfully oily! You can enjoy it now or after 5 years if you manage to restrain yourself.

According to the 97 Pts and the platinum medal of Decanter, Driopi Reserve 2017 is one of the best Agiorgitikos that are on the market. For this reason, it holds position number 7 in this list and of course, the 2017 vintage is expected to become collectible! In other words, it sells really fast so hurry up!

The magical and beloved blend from Mavrotragano and Syrah, of Germanis family, with the ambient yeasts and the eighteen-month stay in oak barrels, stars in the list with the best Greek wines every year, from the first year it was released. Velvety, rich and complex, every year it gets better and better. In our opinion, it is, so far, the best they have ever done, maybe that is why it is almost sold out, only a few months after its release!

The "King of the Mountains" has been on his throne for years and as it seems, it will be very difficult to dethrone him! The special blend of Yiannis Papargyriou from Cabernet Sauvignon, Touriga Nacional and Mavrodafni, late harvest, gives lessons of concentration and complexity! Anyone who tries it once is doomed to love it forever!

Santorini Ftelos comes from a single vineyard in Fira, with 150 (+) years old vines. These vines have hardened due to drought, strong winds and nutrient-poor soil and give little but over-concentrated grapes for Ftelos. The wine fermented and matured in stainless steel tanks, with its fine wine lees, for 24 months, followed by maturation for 2 months in oak tanks, to enhance its complexity. One of the most amazing Santorinis out there.

Xinomavro Reserve Vieilles Vignes Alpha Estate, is one of the few Greek wines that reach for the sky with its high ratings and distinctions, both inside and outside Greece. The Barba Giannis vineyard with old, pre-phylloxera vines, planted in 1919, gives its best fruit for world-class wine. Apparently, it deserves to be on this list for two consecutive years.

Bucephale is the pride of Ligas family, a wine created only in exceptional vintages and one of the first wines they created, with the king of the region, Xinomavro. The old vines gave their most concentrated fruit and then the wine fermented with ambient yeasts and matured for 18 months in French, oak barrels. It is bottled unfiltered and without any other intervention, in the context of mild natural vinification. The limited quantity is bought before it is even bottled and exported to the best restaurants in the world.

Santorini Cuvee Monsignori Estate Argyros, is probably the most emblematic expression of Santorini and definitely the Best Greek Wine of 2021. Its special name is not accidental as Monsignori was the nickname they used for the old vineyards on the island. These ungrafted, pre-phylloxera and over 200 years old vines, from the oldest vineyard of Santorini, in Episkopi, are the base of Cuvee Monsignori. Concentration, incredible expressiveness and huge aging potential make this wine simply mind-blowing.