A TOUR IN SANTORINI IN 5 MINUTES!

SUNSETS, BEACHES, FAVA BEANS, TOMATOKEFTEDES AND OF COURSE ASSYRTIKO! READ EVERYTHING YOU WANT TO KNOW ABOUT THE ENCHANTING ISLAND OF SANTORINI AND ITS WINES! 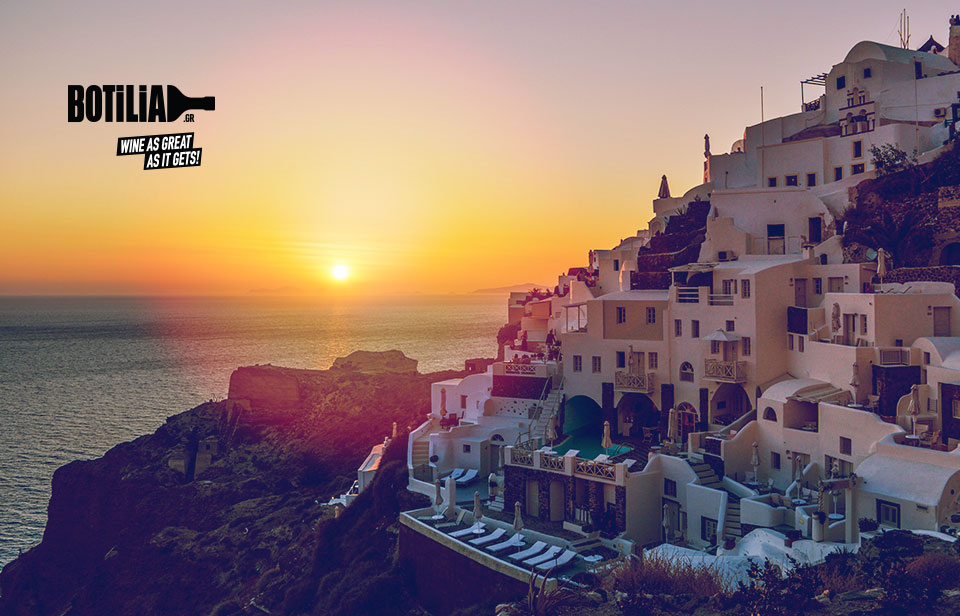 The first time I set foot in Santorini was in 2016 and until then in my mind I had combined Santorini with cheesy romantic sunsets for couples and Chinese. How wrong I was… When I arrived at Santo Wines Winery and took a sip of a sparkling Assyrtiko I thought that this unbelievable, breathtaking view makes Santorini a paradise on earth. On the other hand, the magical sunset, from Caldera, Exo Gonia, Oia or Imerovigli, is so wonderful that it can bend even the most cynical heart (mine) and make you fall in love with the island once and for all. If this does not succeed, you can always count on its amazing wines and its sublime gastronomy, which are the Holy Grail of wine lovers worldwide.

The history of Santorini

The vineyard of Santorini is one of the oldest in Europe with an age of about 3,500 years old. According to archeological research and excavations that have been done on the island, in Santorini and specifically in Akrotiri, vineyards have been cultivated since the 17th century BC. In 1600 BC, the eruption of the volcano followed and so, the prehistoric vineyard was destroyed. After that the inhabitants of Santorini tried to cultivate various plants in Santorini’s land but only the vine managed to thrive. The reason for this is that its roots managed to penetrate the subsoil, reaching such a depth where there was water and nutrients, enough for its survival. Another reason that Santorini has some of the oldest vineyards is that it managed to escape phylloxera! Santorini due to its special soil that is rich in sand and its dry climate did not favor the spread of phylloxera and so there are several vineyards over 100 years old.

In addition, in Santorini we find a special vine training, the basket. This arose due to the climate and the strong winds that blow on the island. This is a rather time consuming and demanding training system in which the grower begins to form the basket as soon as the plant acquires a strong, hard trunk. When the pruning season comes, he removes all the canes of the year except one, the stronger one, which is bend almost vertically, to form a circle almost parallel to the ground, which ties to the trunk of the plant. Each year he follows the same process until a circular basket is created in which the grapes ripen protected by sand and wind.

The grape varieties of Santorini

Yes, you understood well, it is not possible to talk about Santorini without talking about Assyrtiko. The king of white Greek grape varieties is perfectly suited to the microclimate and the soil of the island, giving wines with impressive concentration, sharp acidity and intense mineral-smoky character. With or without barrel, Assyrtiko from Santorini is famous for its aging potential and its impressive evolution over time. At the same time, Assyrtiko could be said to be a versatile grape variety that can produce both dry and sweet but also sparkling wines.

The rare and great red grape variety of Santorini gives wines of great expectations. Formerly it participated mainly in the sweet wines of the island but the winemakers of Santorini realized early enough the possibilities of the variety and multiplied the very few plantings of the island. Today Mavrotragano makes exceptional red wines with rich body, intense tannins and moderate acidity, but it also participates in some rosés as well.

Aidani is a white Greek grape variety that traditionally participates in the PDO Santorini blend but also in Vinsanto. It uniquely expresses the terroir of Santorini by giving wines with yellow fruit, floral character and hints of minerality. They have medium (+) body, marked acidity (less than that of Assyrtiko though) and oily texture. Due to its special character, we now encounter several single-variety bottlings of Aidani.

The wines of Santorini

The dry white wine of Santorini can be made of 100% Assyrtiko or a blend based on Assyrtiko (Assyrtiko at least 75%, Aidani, Athiri). The wine may or may not be aged in oak barrels and is one of the most famous Greek PDOs both inside and outside the country.

Nychteri is a special category of Santorini PDO. This wine takes its name from the night harvest of overripe grapes, which were immediately transported to the winery and began the pressing and winemaking process (in order not to raise their temperature) overnight. Legally Nychteri must have a minimum alcohol of 13.5 and aging in oak barrels for at least 3 months. Traditionally, in Santorini, Nychteri was their best wine, with impressive complexity and a very full body.

For many Vinsanto is the most amazing Greek sweet wine! It also belongs to the PDO wines of Santorini. The blend consists of at least 51% Assyrtiko and is supplemented by Aidani, Athiri and small quantities of other white local varieties. According to the legislation, Vinsanto is made from overripe grapes that are then sun-dried until their sugars reach 370 g / liter. The wine must mature for at least 2 years in oak barrels. In the sun dried grapes, in addition to the sugars, the acidity and aromas are also concentrated, giving a really intense and rich sweet wine, with high acidity that balances perfectly with the rich sweetness.

This includes rosé and red wines from Mavrotragano or a blend of local grape varieties such as Mandilaria, Voudomato and Fokiano. Also, here we find special bottlings from rare Cycladic varieties such as Gaidouria.

The wineries of Santorini

Well, you will not go to Santorini without visiting at least 3 wineries. The experience is unique due to the wonderful wines that you will taste but also because in some you will do wine tasting with a view or accompanied by excellent dishes and you will learn magical stories about the wine "legends" of the island. Imagine the following scenes:

You are at Vassaltis Winery, after the guided tour around the barrels you go up to the tasting room, with the wonderful view and you try Plethora, Santorini barrel aged and Mavrotragano. At the same time, you snack on appetizers that are specially made for each wine… perfect, right?

You descend to the Canava of the late Haridimos Hatzidakis where the family is waiting for you for a flashback to the history of Santorini. While you are trying Nychteri or Skytali, you hear the stories of Haridimos, how Louros was inspired, how Assyrtiko de Mylos was made, how much he worked hard to build his winery and you definitely feel emotional and amazed.

It is noon and you are hungry but you do not want to stop your tour in the wineries. This is how you get to the Winery of Artemis Karamolegos. You try Pyritis, Louroi Platia and Mystirio and then relax in the excellent restaurant and enjoy delicious dishes of Cycladic gastronomy along with the wines of the winery. Pure magic!

Last day on the island and you should definitely pay a visit to Argyros Estate. The reasons are 3. First, the new winery is a true show stopper. Second, you will try Aidani, Cuvee Monsigniori and Nychteri by learning all the details behind the wines. Third, you will get the most amazing chocolate bar filled with Vinsanto, that will keep Santorini’s memories alive and oh so sweet.

The gastronomy of Santorini

Fava beans, cherry tomatoes and capers star in infinite recipes and definitely deserve your attention. Octopus with caramelized onions and fava beans, tomato fritters (tomatokeftedes), salad with local cheese, capers and barley rusks, grilled cheese with tomato jam, atherinopites and so much more will make your tastebuds dance. Of course, you can find a lot of fresh fish to accompany many and different versions of Assyrtiko. Many restaurants and taverns offer great gastronomic experiences based on the local cuisine. From restaurants, Selene and Alali are definitely worth a visit, while from taverns, Psaraki and Panigyri Food Festival can surely fulfil your expectations. Last but not least, my favorite Metaxi mas restaurant, in Exo Gonia that combines both Crete’s and Santorini’s local cuisine and has an excellent wine list!

We talked about wineries, restaurants, sunsets, but Santorini has much more to offer. You can swim in one of the "colored" beaches such as Mavri (black) or Kokkini (red) beach. These beaches, as you can well imagine, get their name from the color of their soil. You can also visit the volcano or take a trip to the opposite Thirasia island, renting a boat that will take you to a unique tour around the beaches of the island. Finally, you can go for a walk in the prehistoric site in Akrotiri but also in the Museum of Prehistoric Thera.