LEARN ALL YOU NEED TO KNOW ABOUT THE LEGENDARY BURGUNDY REGION, ITS CRU, PINOT NOIR AND CHARDONNAY! 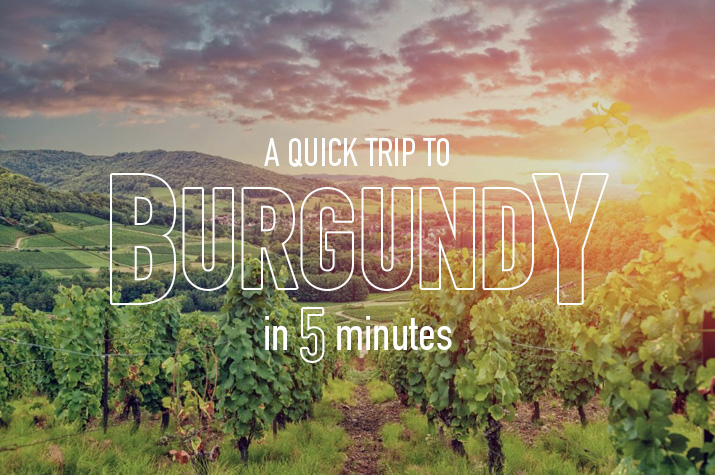 It is one of the most emblematic wine regions of the world and not unfairly since it is the home of two very important varieties, Pinot Noir and Chardonnay. Burgundy, of course, besides this is known for its particular terroir and for some of the finest and most expensive wines of the world. It is located in the eastern part of central France and is very close to Beaujolais.
There are the following wine quality categories based on the vineyard and the region:
- Grand Cru (1% of production eg Echézeaux, Montrachet, iconic wines such as Romanée Conti, La Tâche)
- Premier Cru (10% of production, eg Vosne Romanée 1er Cru)
- Village Wines (37% of production eg Savigny-Les-Beaune)
- Regional Wines (52% of production, eg Crémant de Bourgogne)

Millions of years ago, Burgundy was a part of the ocean and its characteristic calcareous terrain, which is rich in marine fossils, it is due to that fact . This particular terroir is responsible for the mineral character of the region's wines.
The history of wine in Burgundy begins with the Romans and then the monks took over (as always) who took advantage of the vines for religious reasons. Later the wines were destined for the Dukes of the region (as always, No 2). After the French revolution the land was re-divided and came to the hands of the locals who, with their love and passion, made Burgundy and its wines, what they are today. 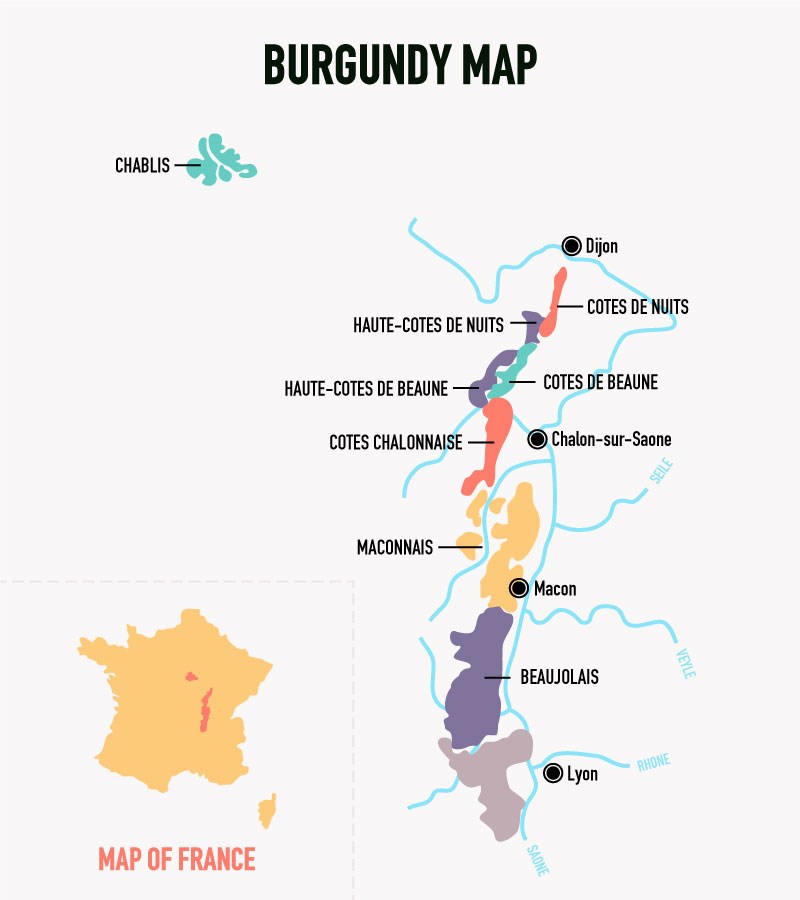 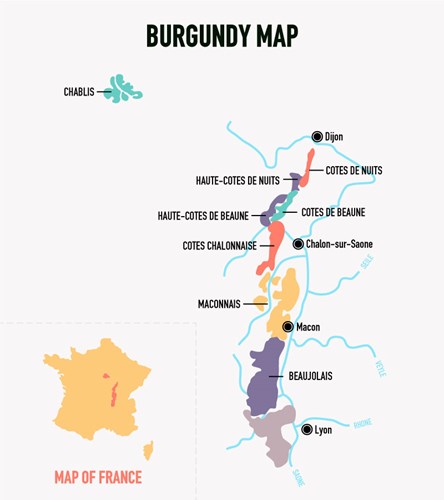 Chablis is the northernmost area and is cut off by the rest. The history of wine in the region began in the 12th century by the Cistercian monks. It definitely is the king of Chardonnay, making the most crisp, mineral Chardonnay of the world, with an impressive aging potential and a fanatical audience. The soil is called "kimmeridgian" and is basically limestone, rich in marine fossils. In this particular terroir and in the cool breeze of the Sereine River, Chablis owes their special mineral character and their sharp acidity. Chablis wines are divided into the following sub - categories:
- Petit Chablis (wines from the surrounding area)
- Chablis (wines from the slopes of Chablis, the majority of Chablis wines that we find on the market)
- Premier Cru Chablis (only 15% of production)
- Grand Cru Chablis (basically there is a grand cru that includes 7 vineyards, the wines here are a bit different as a lot of them mature in oak barrels)

Its name means the slope of the night and is located next to Dijon. It is the home of 24 grand cru vineyards and 80% of the production is red wines from Pinot Noir. The 20% refers to white wines from Chardonnay or rose wines from Pinot Noir and sometimes Pinot Gris or Gamay (Marsannay). Pinots from this region are considered among the best and most expensive in the world and can age for several decades.

It is located south of Côte de Nuits and the two are called Côte d 'Or (golden hillside), which is considered the best part of Burgundy. It includes 8 Grand Cru, 7 of which are white wines from Chardonnay. Corton Grand Cru is the only one that includes white (Chardonnay) and red (Pinot Noir) wine. White Corton was Emperor of Charlemagne's favorite wine, and thus acquired the name Corton - Charlemagne, in his honor.

It is located between the towns of Chagny and Saint Vallerin and has no Grand Cru. Instead it is considered one of the most value for money options in both Pinot Noir and Chardonnay. Also the village of Bouzeron, the first one we meet, is dedicated to the other white variety of Burgundy, Aligoté. Below we find the village Rully. There sparkling wines  are made, white and rosé, using the traditional method (Cremant de Bourgogne).

It is the southernmost and largest region in Burgundy. It is mainly known for its Chardonnay. In this area we meet the famous Pouilly-Fuissé village that makes excellent Chardonnay with oak barrel maturation and ripe, juicy fruity character.

Burgundy has a rich gastronomy, with the beef bourguignon being the most known recipe. It is essentially a slow braised beef in red wine with mushrooms and lardons (chopped bacon). Another well-known recipe in the region is oeufs en meurette, that is, eggs braised in red wine. It is also famous for its delicious cold cuts such as jambon persillé and Andouillette sausages. Since we are talking about France, "smelly" cheese such as Mont D'Or and Brillat - Savarin could not be missed. Gougeres, reminiscent of cheese puffs, are also very common. Finally, Burgundy is the home of the famous Bresse chicken and the sophisticated calf breed, Charolais.